18 months in casks at Château Montrose

Bordeaux is a superb wine region that is constantly in the public eye. Its vintages act as a benchmark for the whole of France and are scrutinised across the globe. Our aim was to go into much finer detail. A few months after bottling, we set up a ‘contest’ between the Right and Left banks for the 2016 vintage. A fair amount of praise was showered on the vintage when it was released, but how is it faring now?

After a very good year in 2015 in Bordeaux, 2016 started with rain, and lots of it. From winter to June, there was as much rain as the region usually gets in an entire year. With vines all-set to bloom, this was worrying. And then, around mid-June, the rains stopped and a hot, dry summer followed. In fact, it was almost the driest in a hundred years! There was still the odd shower, but it came at the right time, and was moderate. Autumn was hot through to harvest, and nights were cool. Although overall, the year witnessed fairly classic sunshine (2,024 hours of cumulative sunshine) and high rainfall (922 mm), the sequence of events is worth remembering.

On the Pomerol plateau, not far from Pétrus, lie the vineyards of Château Cantelauze. Established in 1989 by the Boidron family (also owners of Château Corbin Michotte in Saint-Émilion), this estate is a jewel of 0.9 ha. Emmanuel (photoC1) shares his vision with us: “2016 is a very special, exceptional and magical year. Due to the growing season, everything in Bordeaux is good!” Flowering was perfect, and the estate did not suffer from any mildew attacks. Harvesting began at the end of September, with no rainfall. Both the skins and the pips were fully ripe. Admittedly, there were some fearful moments regarding the amount of grapes – Cantelauze only produces around 6,000 bottles per year so every grape counts - but ultimately, output proved to be reasonable. About ten days after the Merlot (90% of the varietal range), the Cabernet francs were picked, again in perfect condition. Sorting was only done “to give ourselves a clear conscience”. (photoC2)

Emmanuel has an inkling that the vintage will have substantial ageing potential - 30 to 40 years. “Over time, a good wine gets better, but a bad one spoils!” In terms of ageability, two factors seem to stand out: ripe but not overripe grapes producing quality tannins, and ageing in barrels (the Boidrons descend from a family of coopers). For a top-flight wine like Château Cantelauze, after fermentation (photoC3), 18 months spent in 100% new barrels is a requisite. “With time, this is going to be sublime”. 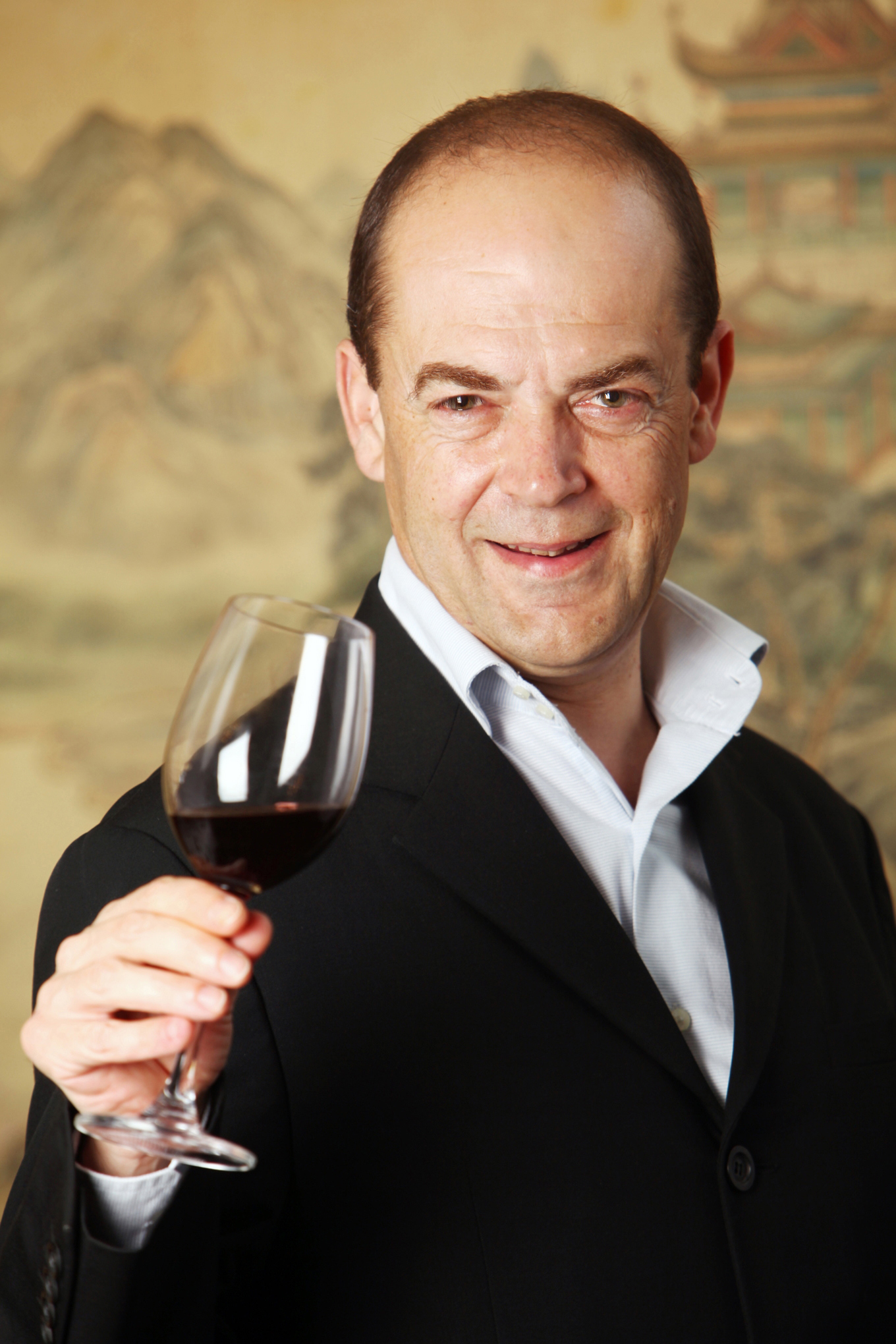 A dozen kilometres from Cantelauze, when we ask Thierry Cap de Mourlin, the owner of the eponymous vineyards, about 2016, his reaction is instant: “It’s a stellar vintage”. Harvesting began in mid-October on his various properties in Saint-Émilion. This was quite late because he favours peak ripeness, but not over-ripeness. As usual, harvesting was done by hand, and the fruit was of a very high standard. Obviously, vineyard management focuses on single vineyards, individual grape varieties and chateaux, each of which has its own winery.

At Château Balestard La Tonnelle (photo CM1), the 10.6-hectare property named after the Canon of Saint-Émilion and located 800 m from the town, vines grow on a clay-limestone plateau where the rock is ubiquitous. The blend (Merlot 70%, Cabernet Franc 25%, Cabernet-Sauvignon 5%) adds some roundness on the palate.

At Château Cap de Mourlin (photo CM2,) the 14-hectare estate North of Saint-Emilion, the plateau is different. The slightly higher percentage of Cabernet-Sauvignon (10%) in the blend imparts more noticeable length and forthright characters.

Both are already looking very good, with fruit and nice length on the palate. Thierry comments that whilst 2015 was “very tannic”, 2016 is “very fruity, with extra freshness”.  After 16 months in barrels, half of them new (photos CM3 and CM4), the Grands Crus were bottled in May-June. There is no doubt that the propensity for ageing is substantial, he says.

At Château Canon (photo CC0), with its thirty or so virtually unbroken hectares, the Wertheimer family, who also own Chanel, have been making sizeable, and noticeable, investments (photo CC1) in the quality of recent vintages. But for 2016, it was clearly the end of the summer that saved the vintage. The Merlot picked at the end of September and Cabernet Franc from 7 to 11 October are magnificent. (photo CC2). And yet the prospects were initially very challenging. When the rain finally stopped at the beginning of summer, instructions were given not to aerate the vines too much through leaf removal, and to do so less than usual. Through the ensuing hot spell, the leaves acted as a parasol and protected the vines, proving that their intuition was right. Although the drought then became severe, the fossil-rich limestone located about ten metres away became a water reservoir. People haven’t been growing vines here for more than 500 years by accident! Then in mid-August, it was decided to strip the surrounding leaves around the clusters more clearly. All that had to be done then was to delay the harvest a little and wait for the grapes to achieve the desired level of ripeness.

Ultimately, yields reached 45 hl/ha and although the alcohol content weighed in at 14% there was freshness (pH of 3.57). This paved the way for a lengthy ageing period of 18 months, producing a wine exuding black cherries and ripe fruit. The tannins make the texture "creamy and persistent". 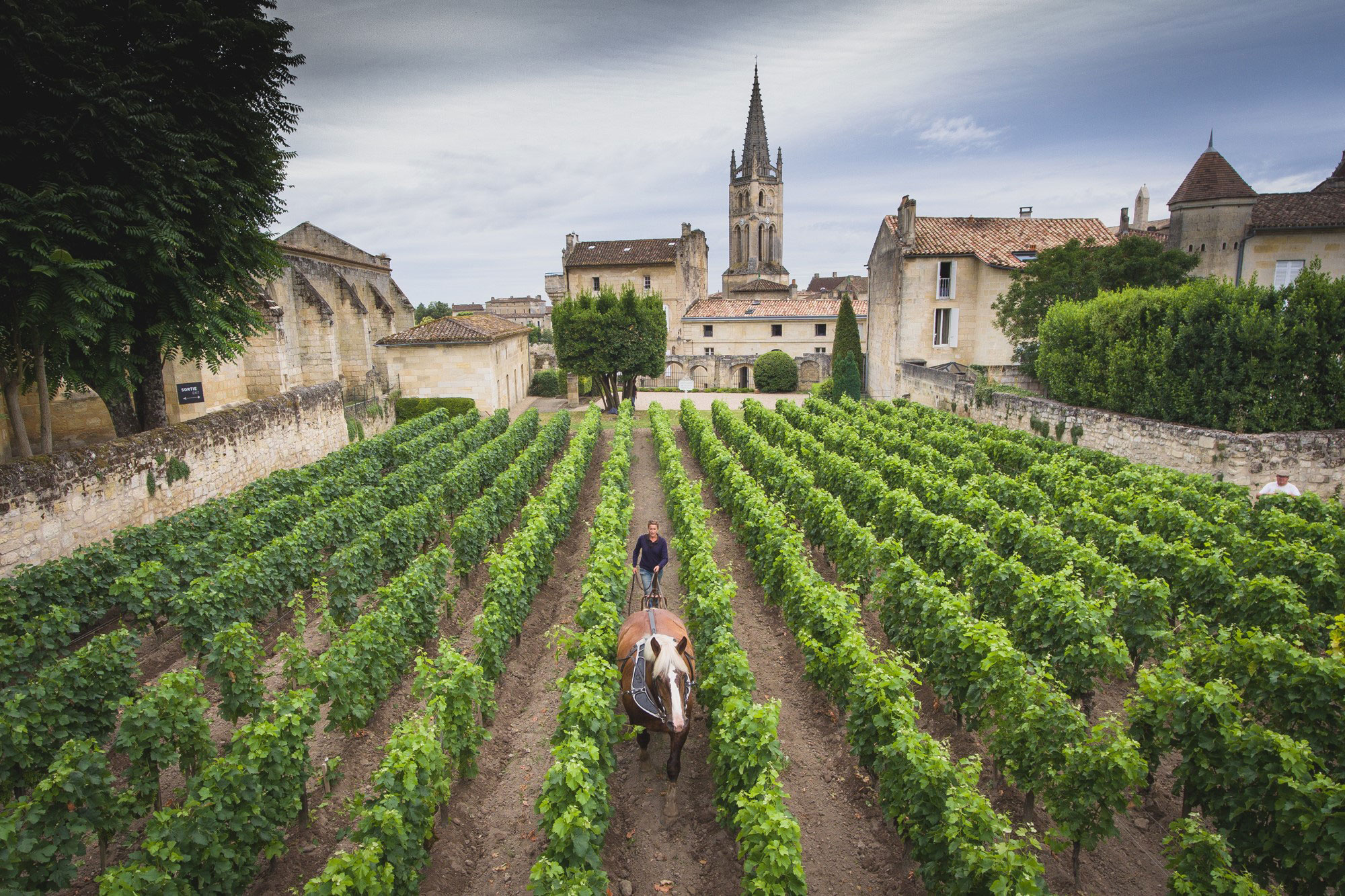 The Left Bank, for Château Montrose, a real gentleman

(PhotoM0). One year after its bicentenary, Montrose was already farming 50% of its 95 hectares organically; 2019 is the first year the entire property will be organic. The Saint-Estèphe, 1855-classified Grand Cru Classé, has embarked on a journey where the ultimate destination is biodynamic. (photoM1) July, August and September 2016 were clearly not as wet as usual. This is a sun-kissed vintage with very deep-hued juice, producing around 13.3% alcohol. The location of the vines, right next to the Gironde estuary (PhotoM3), and thus soaking in the maritime influence, imparted freshness. The wine’s pH is around 3.65 and acidity helps balance the wine. “This is a real gentleman”.

In 2016, Montrose continued to place a lot of emphasis on press wines. When the grapes are pressed, the free-run juice (at the beginning of pressing, when the grapes naturally yield their juice) is separated from the press juice (when the pressing is stronger). Careful extraction is of the essence, because in the past, the top wine was sometimes described as “severe” and needed to be kept for about thirty years. Now, Montrose aims to make it more enjoyable when younger. Therefore, 70 to 80 batches are fermented separately, then blended in subtle proportions. This is the task of Vincent Decup, the winery and R&D director (photoM32). At the same time, there is no intention of altering ageability! The wine was then matured for 18 months in 60% new barrels (photoM4), as is customary. The objective has been achieved, and the tannins will be very silky when it comes to tasting (photoM5).

The star of Margaux (along with the eponymous Château) has been farmed biodynamically since 2014 (photoP1). Rainfall in the spring therefore created strong pressure from mildew, a fungal disease and the bane of many a winegrower. It of course could not be treated with fungicides. But the teams quickly rallied, and fortunately flowering went perfectly, because the rain stopped. (photoP11)

The summer that followed was not very hot initially. Lack of rain in the autumn meant that the harvest could be postponed until the desired ripeness level was reached. Harvesting took place from October 3 to 18 and was among the latest ever at Palmer, says estate manager and winemaker Thomas Duroux (photoP2). Admittedly, the yield here was only 30 hl/ha, but the aromatic intensity of the grapes was extraordinary. Blending (Cabernet-Sauvignon and Merlot in equal proportions and a touch of Petit-Verdot) and maturation followed usual practice. Whilst Thomas Duroux compares 2015 to 2009 (“the charm of exuberance”), for the 2016 his analogy is with the 2010s (“Medoc classicism, austere but with extraordinary depth”). When will it reach its peak? It’s still difficult to say - the wine will last for 50, 60 or even 70 years. Although the velvety tannins are there, the wine deserves to be kept. The usual wait is around ten years, but for 2016 it will be more like 15 years. And if you open the bottle before then, allow 2 to 3 hours in a decanter!

A few kilometres away, at Châteaux Léoville-Barton and Langoa Barton (photoLV01), when the rain stopped just during the flowering window, it was described as “miraculous”. It allowed flowering to be consistent, in turn guaranteeing balanced clusters. (photo LV1) The Saint-Julien vineyards subsequently experienced water stress which intensified until September 13, when a major storm cooled the vines (photoLV001). But the deep roots of the Grands Crus Classés’ old vines, as well as the gravelly soils, fortunately erased the effects of lack of, or excess water. In 2016, the blend for the Léoville top wine is 86% Cabernet-Sauvignon and 14% Merlot (the Cabernet Franc, which is grown on the estate, was not up to standard, as in 2015). Langoa's blend was 55% Cabernet-Sauvignon, 37% Merlot and 8% Cabernet Franc. The winery, which is kept at a steady 15°C (photo LV2), then provided a home for the barrels for 16 to 18 months of maturation. Ultimately, this is a restrained vintage, with balance going neither one way nor the other. Alcohol content (13% for both wines) and density are also balanced. This is a “precise vintage with fine tannins”. 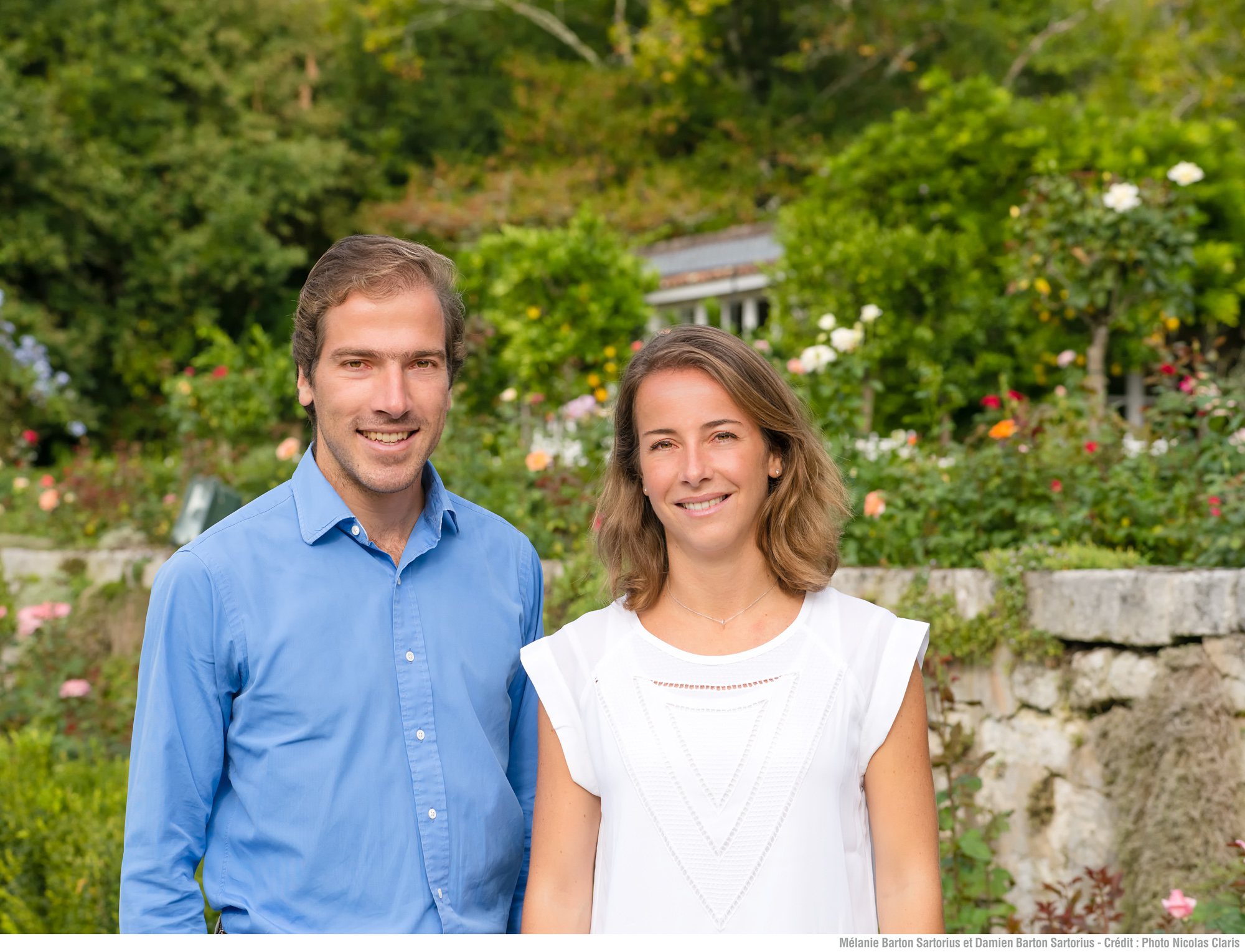 Mélanie and Damien Barton-Sartorius, the brother and sister at the helm of Châteaux Léoville Barton, Langoa Barton and Mauvesin

And for the verdict!

Based on all the above, it isn’t hard to see that it is almost impossible to choose between the Médoc and Libourne as vintage victors. 2016 is a year when the top vineyard sites combined with today’s tried and tested techniques to produce great wines. Although it would be wise to lay some down now, the greatest challenge for enthusiasts will be to wait for them to show at their peak.