The vineyards at Domaine de Beyssac

The major wine regions of South-West France, among them the Atlantic wine regions, have carved out a reputation for themselves that extends far beyond the borders of France, so much so that they often eclipse the many other, more boutique appellations in this extensive area. However, Bergerac, Côtes de Duras, Marmande and even Buzet, which are nestled along the banks of the Dordogne or the Garonne just a few dozen kilometres from Bordeaux, deserve a visit in their own right. There is more here than familiar grape varieties and a continental climate influenced by the Atlantic – each one capitalises on its differences to assert its defining features and make a place for itself in the sun.

Whether it’s Merlot, Malbec, Cabernet franc and Cabernet-Sauvignon for the reds, or Semillon, Sauvignon blanc and Sauvignon gris for the whites, the most widely planted grape varieties in the Atlantic wine regions have a sense of déjà vu about them. They also bask in the same continental climate with its Atlantic influences as a certain Bordeaux. The major rivers that wend their way through south-western France complete the picture in terms of similarities. “Our sweet wines are produced in Monbazillac in the same conditions as Sauternes”, explains Laurence Métifet, who represents the fourth generation at the helm of Domaine du Haut-Montlong in Bergerac. “Our soils are also clay-limestone and noble rot develops due to the fog that rises off the Dordogne”. The Marmande wine region is a direct continuation of Entre-Deux-Mers on the right bank of the Garonne, and the Graves on its left bank.

Add to that an inevitable lack of notoriety compared with one of the most famous wine regions in the world, and the distance the Atlantic wine regions still need to cover to emerge from the shadow of Bordeaux becomes more tangible. Far from being daunted by this challenge, though, the winegrowers of Bergerac, Marmande and Buzet are determined to achieve success. Some choose to focus on their bond with the land, others promote terroir-driven characteristics or local specificities to bolster the personality of their wines, but all of them champion their differences, fuelled by a level of affordable quality rarely seen in South-West France.

Advertising campaigns promoting Bergerac wines as the “second great wines of Bordeaux” are now but a distant memory. In recent years, the wine region situated on the banks of the Dordogne has stepped up its efforts to establish its own identity, namely by focusing on its place in a much larger ecosystem. “People in Bergerac have a strong bond with their environment”, explains Marc Catteaux. After working in Bordeaux, the winemaker at Château Pique-Sègue decided to “gravitate towards something more people-focused with a stronger connection to terroir” in 2007. Twelve years later, he has come to an irrefutable conclusion: “Here, our approach to the land is more hands-on, more countryfied, in a positive way. We work within a close-knit community with our neighbours, where idea sharing is encouraged. Our approach aligns with the organic movement, where particular attention is paid to tillage. Our farms are placed at the centre of their agro-ecological environment”. A few kilometres away, at Domaine du Haut-Montlong, Laurence Métifet shares Marc Catteaux’s ethos. For fifteen years, she has sworn only by sustainable winegrowing. She was a recipient of the Terra Vitis endorsement for many years before she began transitioning her vineyard to organic with certification slated for 2020. “We see former customers returning despite the fact that we have always worked to the same standards”, says Laurence Métifet, both astonished and amused. “The only difference is the labelling, and the fact that we now publicise it”.

In addition to their vineyard management techniques, Bergerac winegrowers can draw on a handful of appellations and as many different wine profiles. Laurence Métifet produces red and white Côtes de Bergerac but also, more importantly, sweet wines under the Bergerac and Monbazillac appellations. “We have several strings to our bow. In all, we can offer eleven different wines, all of them estate-grown, which allows us to reach out to all types of consumers”. It also allows her to play around with her different vineyard sites. “We have vines on the plains and others on hillsides. We did a lot of experimentation with individual vineyards, producing offbeat wines, even from two neighbouring plots”. At Château Pique-Sègue, Marc Catteaux also produces Sauvignon blanc and Sauvignon gris with very distinctive profiles depending on vineyard aspect. “There is more freshness in the North - the whites are more tense, lively and nervy,” he comments. “We devote a lot of time and effort to blending and tasting, pushing the boundaries of ripeness in some plots and mixing different aspects so that Bergerac terroir effect can be maximised”. 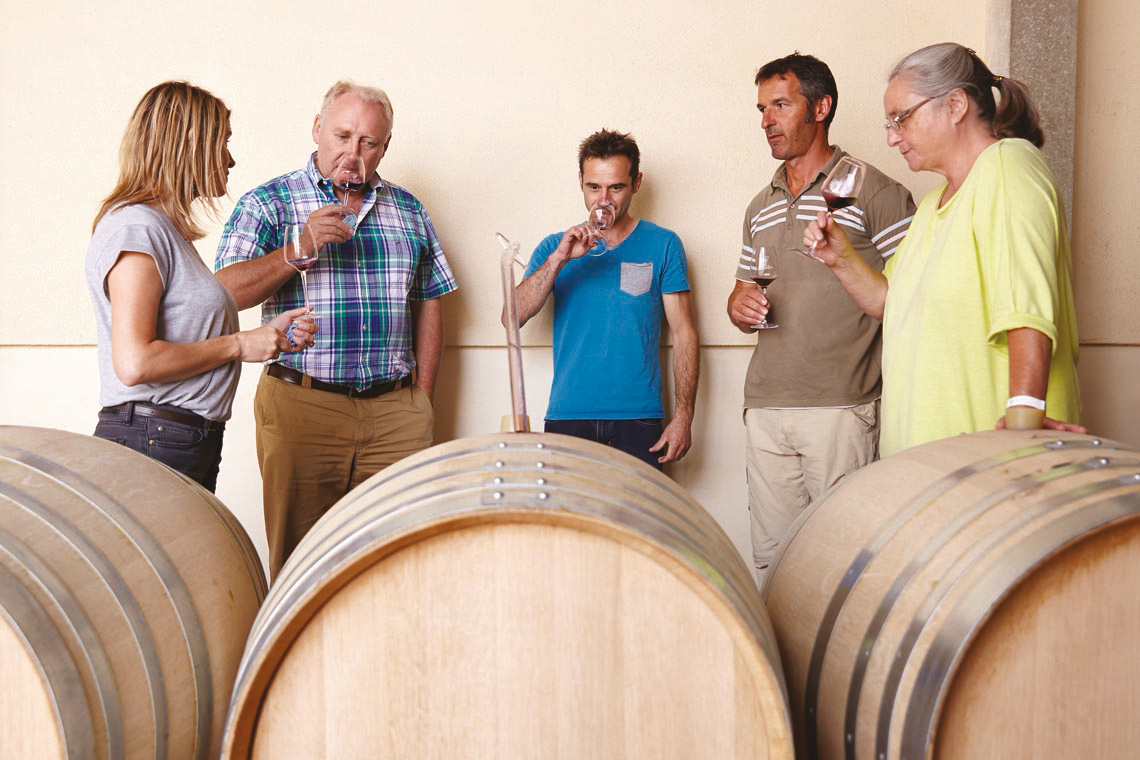 Located on the slopes overlooking the Garonne, adjoining Entre-Deux-Mers and Graves, the Marmande region long supplied the Bordeaux wine trade with bulk wines. Admittedly, both the soil and the vineyard management techniques are well-suited to this. Boasting two distinct vineyard areas rooted in soils very similar to those found farther down the river, coupled with techniques similar to those used in Bordeaux, Marmande's winegrowers had the perfect opportunity... albeit one that was not viable in the long term. The crisis caught up with them at the beginning of the 21st century, threatening the very survival of an appellation created in 1990. After a long process of vine pull, winegrowers in the Côtes-du-Marmandais appellation area have made a fresh start and reconnected with their roots to develop red wines that are prized for their quality. Their secret? A native grape variety, found only in this area: Abouriou. With its dense, compact clusters of large, intensely black grapes, this rustic variety imparts spice notes and unrivalled typicity to the other red varieties authorised in the appellation, which include Merlot and Cabernet Franc. “This is an early-ripening variety, hence its patois name”, explains Bertrand Chérel, director of the Marmande co-operative winery, which now represents more than 90% of the appellation. “It produces very fruity, spicy wines which lend themselves perfectly to ageing due to its fast-maturing tannins”.

At Domaine de Beyssac, this endemic grape variety has become one of the cornerstones for the Broutet family, one of the appellation’s eight independent winegrowers. “Merlot gives Abouriou the structure it lacks, while Abouriou adds originality and spice. It is a surprising grape variety that appeals to our customers”. It is therefore no wonder it can be found across the entire appellation, both on the right bank and the left bank. “It is the common denominator between the two banks”, explains Pauline Broutet. “All the appellation’s independent winegrowers use it and publicise it”. After emerging in the 19th century, Abouriou almost disappeared a century later as international grape varieties rose to prominence. Aware of its significance, Marmande winegrowers set up a conservation centre in 2006, “to preserve its original genetic diversity”, says Bertrand Chérel.  Nurseries are now drawing on the centre’s stock to supply winegrowers. 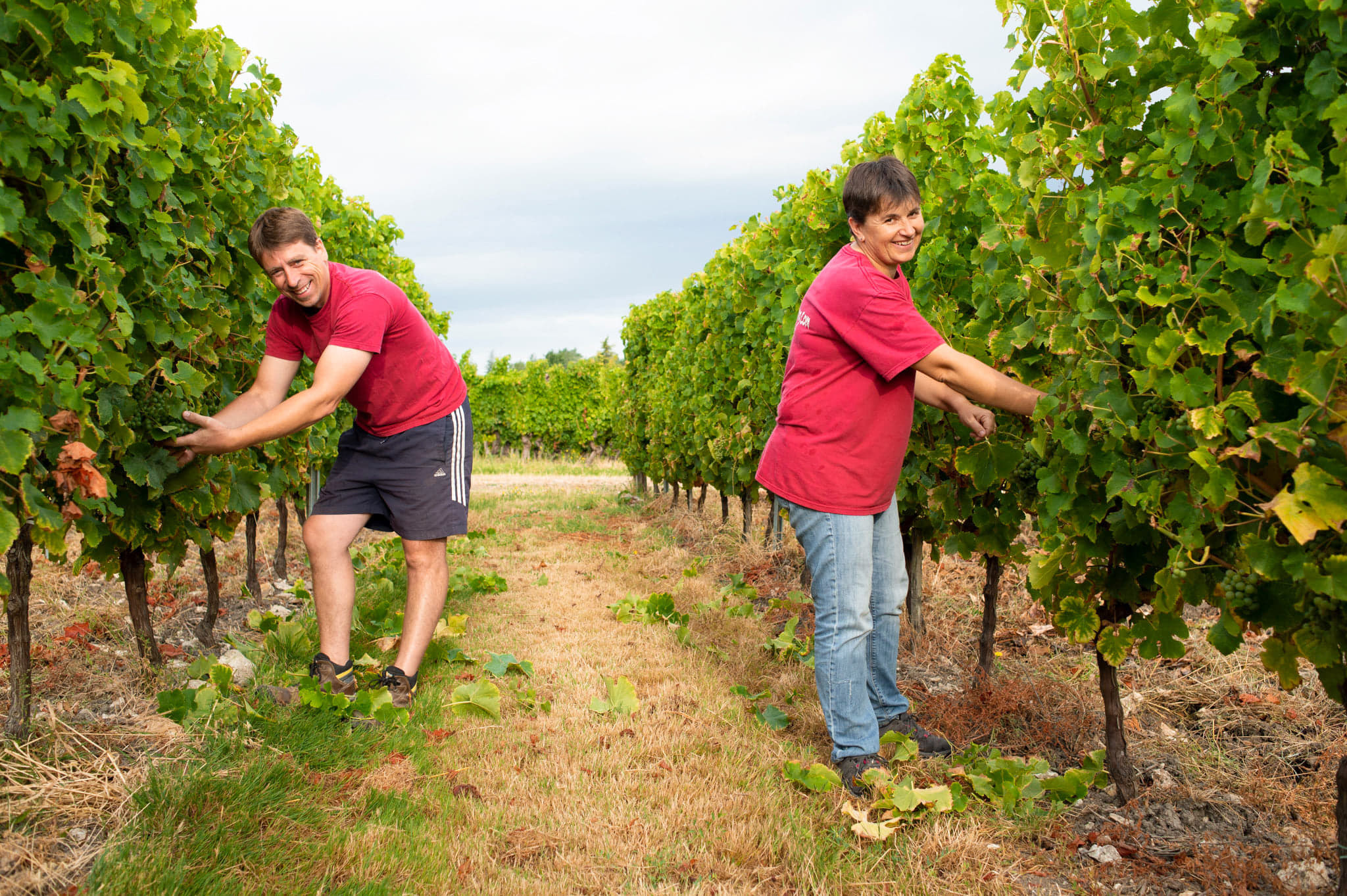 Nestled on the left bank of the Garonne, on the outskirts of Agen on the way to Marmande, the Buzet wine region made a name for itself thanks to the co-operative winery to which nearly 97% of local winegrowers have gravitated. The appellation also has about ten independent winegrowers, and Henry de Batz is one of them. At the helm of Château de Salles since the end of the 1980s, he decided to focus on terroir on his property, then planted to cereals. “Buzet was covered with vines before phylloxera”, he explains. “After the crisis, a series of sharecroppers and farmers converted the land to pasture and cereal fields, but the inherent terroir remained unchanged. We are lucky to have hillsides and sunny, clay-limestone, gravelly and deep soils that are particularly conducive to growing vines”.

Although the area is home to the region’s typical grape varieties, spearheaded by Cabernet-Sauvignon, Cabernet Franc and Merlot, “the difference stems from the terroir”, claims Henry de Batz. “Merlot, for example, does not produce the same style of wine here as it does in Bordeaux”. The impact of the soils is further strengthened by a climate with more marked temperature variations and less rainfall than along the Aquitaine coast. The Landes forest, which borders the vineyard to the West, partly explains these specific weather patterns. Summers are warmer than in the rest of the region and guarantee the grapes will ripen well a few days early. “Harvesting is three to four days earlier here”, concurs Henry de Batz.

Each vintage, the estate produces two labels displaying very distinctive characters. Aged in barrels for 12 to 24 months, the d'Artagnan label, named as a tribute to Henry de Batz's illustrious ancestor, struggles to make a name for itself alongside Bordeaux and Cahors, despite its value for money. “We still suffer from competition from the major wine regions”, the Château admits. “Awareness of Buzet remains low. Customers find it challenging to locate us on the map”. For winegrowers, the answer lies in education. At the markets, fairs and exhibitions he attends, but also the happy hours organised each summer on the estate, Henry de Batz draws attention to what drives the quality of his wines as a way of differentiating himself for potential customers. “We talk to them about the integrated pest management techniques we use and the importance of showing respect for the environment. We explain every step, from manual shoot thinning to the traps we put in the vineyards and harvesting by hand, so that they understand what is behind our pricing”.

The challenge of securing awareness

By showing consideration for the environment, harvesting by hand and selecting plots, to name a few, the Atlantic wine regions have in recent years broken away from their image of second-class winegrowers compared to Bordeaux and Cahors, showcasing their quality approach to winegrowing and turning the spotlight on the style of their appellations, and even their estates and individual vineyards. There are tangible results: showing unmistakable typicity and particularly appealing value for money, the wines by Domaine du Haut-Montlong, Château Pique-Sègue, Cave du Marmandais, Domaine de Beyssac and Château de Salles have managed to make their mark.

All that needs to be done now is to convince the marketplace, which still struggles to position them, both geographically and in terms of price points. “It's quite ironic”, comments Bertrand Chérel from the Marmande co-operative winery. “We have succeeded in making a name for ourselves abroad, particularly in China, Japan, Southeast Asia and Quebec. Customers know us and even visit us, unlike the majority of French people who have difficulty locating us. We need to remind them that we are in South-West France, between Bordeaux and Toulouse, but in the loosely defined realms of South-western wines, it is not always easy to identify us. In Bergerac, Laurence Métifet uses social media to improve exposure and secure new markets. Her innovative strategy has been accompanied by a facelift of Domaine du Haut-Montlong’s visual identity, now HM on the labels. “Everyone plays to their strengths to succeed. We are attracting attention, but in a different way”.

By Alice de La Tour - Photographs: Courtesy of the estates