Land of contrasts: Voyages of discovery

The town of Franschhoek is enclosed on three sides by mountains

Although the Cape winelands are relatively small, with less than 100,000 hectares of vines planted, there are 21 official wine routes to explore.

There has been wine tourism in South Africa since the early 1700s, when travellers started visiting the celebrated vineyards of Constantia. In 1829, British naval officer James Holman noted that every passing stranger thought it “quite necessary to visit Constantia as travellers going to Naples would Herculaneum or Pompeii.”

Located an easy 20-minute drive from the centre of Cape Town, Constantia remains a popular destination for wine tourists. However, there are now more than 100 official appellations in the Western Cape and Northern Cape provinces. To make it easier for visitors to explore the Cape winelands, 21 official wine routes have been developed, most of them within a 100km radius of Cape Town. In fact, the city itself (as one of the world’s foremost tourism brands) is now an appellation in its own right, with wines grown in Constantia, Hout Bay, Durbanville and Philadelphia all permitted to be labelled as Wine of Origin Cape Town.

Although the Cape’s wine routes are all relatively close to one another, with an excellent road infrastructure making it easy to cross between them, they are quite diverse thanks to ever-changing landscapes and a remarkable biodiversity. Top-class hotels, guesthouses, restaurants and wellness spas add to the appeal, and wine tasting experiences can be combined with activities including mountain biking, hiking, golf, horseback trails, whale-watching and shark diving.

South Africa’s traditional winegrowing areas are rarely 50km from the sea, with the icy Atlantic Ocean meeting the warmer Indian Ocean at Cape Agulhas, the southern tip of Africa, where an exciting new, cool-climate wine area has emerged.

To reach the Agulhas Wine Triangle, take the N2 highway out of Cape Town, towards Somerset West, perhaps turning off at the R44 to visit Ken Forrester Wines, which specialises in Chenin Blanc and offers exceptional bistro fare at nearby restaurant 96 Winery Road, or taking the old Sir Lowry’s Pass Road to Idiom Wines, which is owned by the Italian Bottega Family, who offer innovative wine and canape pairings.

Returning to the N2, drive over Sir Lowry’s Pass to reach the cool upland wine district of Elgin, essentially a crater in the ancient sandstone Hottentots Holland mountains. Traditionally this was (and still is) an apple-growing region but Chardonnay, Riesling, Sauvignon Blanc and Pinot Noir grow particularly well here. Wineries worth visiting include architecturally acclaimed Almenkerk Wine Estate, where natural, minimalist, authentic wines are the goal, and Elgin Vintners for a fynbos walk, cheese platter and tasting in the Painter’s Cottage. Consider staying at Lothian Vineyards where ‘luxury activities’ include waterskiing, fishing and paintball in addition to wine tasting.

The N2 then carries on to the appellation of Bot River, which stretches down from the Groenlandberg and Babylonstoren foothills to the Bot River lagoon, with Chenin Blanc, Shiraz and other Rhone varieties faring particularly well on the Bokkeveld shale and Table Mountain sandstone soils. Bot River is home to an eclectic mix of cellars loved for their rustic charm, including Wildekrans Wine Estate where just 70 out of 1,000 hectares are planted with vines. Stay in one of the cottages and/or enjoy the ‘indigenous dining experience’ offered by chefs who ‘forage’ from local artisans and farmers within a 100km radius.

Bot River is the gateway to Walker Bay, where Southern Right whales frolic every spring. The seaside town of Hermanus offers the best land-based whale-watching in the world, and it’s right on the doorstep of the Hemel-en-Aarde (Heaven and Earth) Valley which is renowned for Chardonnay and Pinot Noir. Start at pioneering Bouchard Finlayson then move up the valley (with its predominantly weathered shale soils) to Sumaridge, which boasts accommodation, restaurant, nature trails, mountain biking and fishing, then end on a high note at Creation, well worth the drive for its innovative, ever-changing food and wine (or tea) pairings.

From Hermanus, if you carry on traveling East, you’ll reach the wineries of the Stanford Foothills – and beyond that, the Agulhas Wine Triangle mentioned previously. Indeed, if you drove 400km East along the Garden Route, you would even reach the recently planted vineyards of Plettenberg Bay.

For a completely different coastal experience, travel North from Cape Town to the Durbanville Wine Valley, where hilly terrain, deep soils, cooling sea breezes and night-time mists result in significant day-night temperature variation for slower ripening. Wineries to visit include Durbanville Hills for its wine pairings with chocolates, cheeses or dried fruit and biltong (not to mention picture-postcard views of Table Mountain), and Nitida Cellars which boasts two restaurants: Cassia for stylish contemporary dining and Tales for casual café-style meals.

From Durbanville, take the R27 coastal road towards Darling, where the Groenekloof ward is one of the appellations closest to the icy Atlantic. Evocatively named wines include the Seasalter Sauvignon Blanc (with 10% Semillon) from historic Groote Post Vineyards, which offers an ever-expanding range of wines as well as game drives, bird-watching walks and ‘modern country cooking’ at Hilda’s Kitchen restaurant. A little further inland is Cloof Wine Estate, focused on red wines from dry-farmed bush vines, some planted as long ago as 1966.

From Darling, head inland to the rolling hills and wheat fields of the Swartland, where pockets of old, unirrigated bush vines in the foothills of the Piketberg, Porterville, Riebeek and Perdeberg mountains have attracted some of South Africa’s most exciting winegrowers, including Eben Sadie, Adi Badenhorst and Chris and Andrea Mullineux. Of course, they’re newcomers compared to two producers established as cooperative cellars in the 1940s: Swartland Winery near Malmesbury, which now boasts 60 producer-owners and 2,689 hectares of vineyards, and the Riebeek Valley Wine Co (formerly Riebeek Cellars) which has 30 shareholders. 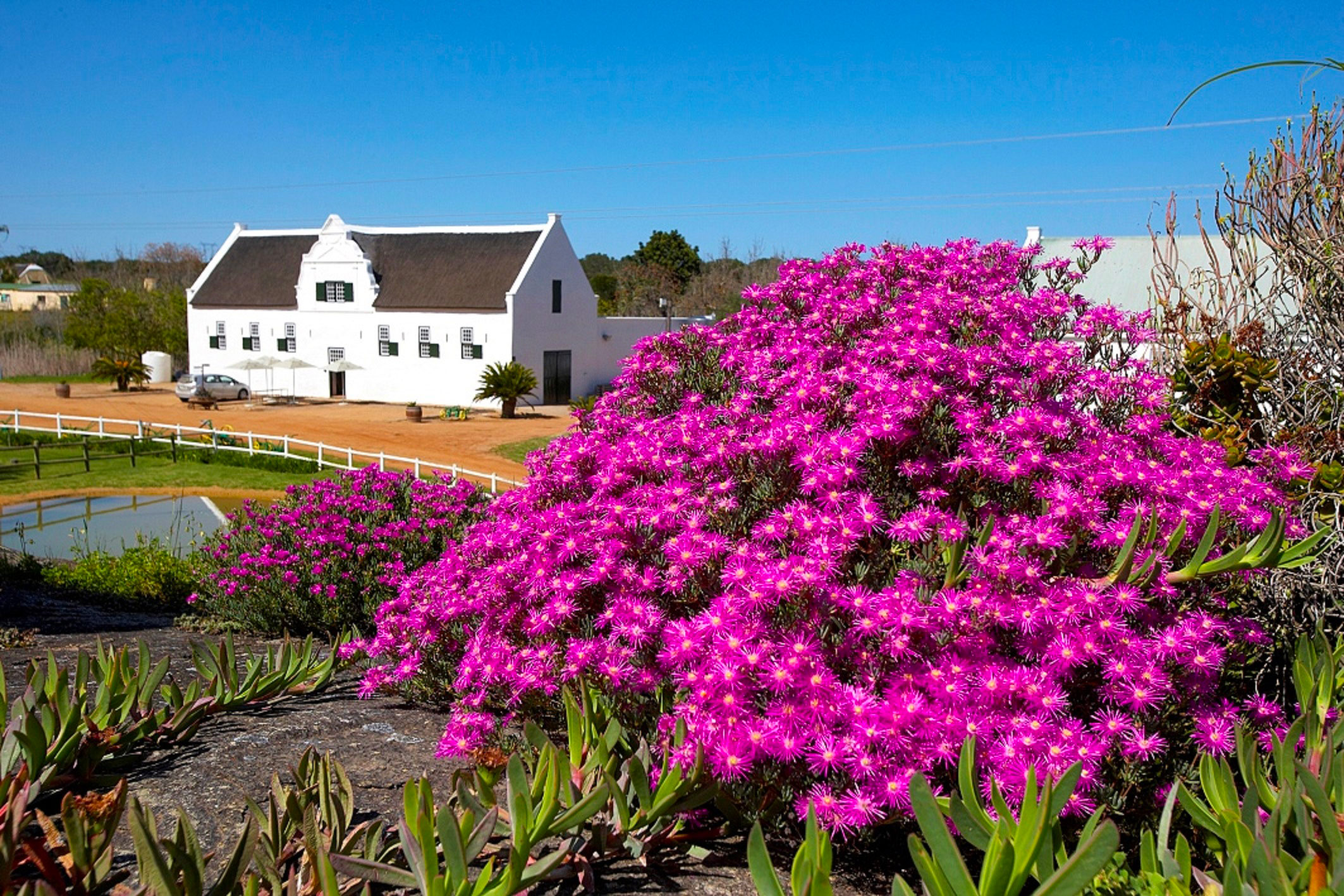 Groote Post is a historic 18th – century farm near Darling on the Cape’s West Coast, famous for spectacular spring-time flowers

From the Swartland, breathtaking Wellington is worth a visit, especially in winter when there is snow on Hawequa mountain peaks. Some 85% of the wine industry is supplied with vine cuttings from the nurseries of Wellington, which is also home to South Africa’s only whisky producer, the James Sedgwick Distillery. Diemersfontein Wine & Country Estate is famous for inventing the so-called “coffee Pinotage” (the uniquely South African red grape vinified to bring out overt mocha flavours) but the wine range is extensive, the Aan Tafel restaurant open for breakfast, lunch and dinner, and the guest rooms and cottages furnished in comfortable country style for true wine estate tranquillity.

Running through Wellington and Paarl to the South is the Berg River, a life-giving artery that (when necessary) provides supplementary irrigation during the hot growing season. Paarl’s busy Main Road is lined with no fewer than 20 working farms, but a more scenic option is to head along the Noord Agter-Paarl road to Under Oaks, a boutique cellar dating back to 1695 with a popular pizzeria and stylish accommodation, or Ridgeback Wines, the starting point for Hero Adventures’ mountain bike trail around Paarl Mountain. Make sure to try the flagship Signature C and Signature S blends, dominated by Cabernet Franc and Shiraz respectively.

Paarl is a good starting point for Route 62 which claims to be the longest wine route in the world, stretching right through the Klein Karoo (best known for fortified wines). Immediately after the Du Toitskloof mountains, you’ll find exceptional value in the Breedekloof, most notably at Du Toitskloof Winery, the largest accredited producer of Fairtrade wines in the world. Next you’ll reach Worcester, which is South Africa’s most important brandy-producing area (home to the largest distillery of its kind in the southern hemisphere) but several cellars also bottle quality wines under their own labels, including Alvi’s Drift (offering tastings and tours by appointment only).

The Robertson Wine Valley is exceptionally wine-tourist friendly, especially when it comes to wine festivals including the Wacky Wine Weekend, Wine on the River and Robertson Slow. Dubbed the ‘valley of vines and roses’, Robertson has calcareous clay soils, rich in limestone, that are eminently suitable for stud farming and also, of course, winegrowing. At Excelsior Estate, the De Wet family’s full-blooded reserve wines are named after their champion racehorses (they also offer accommodation in a lovingly restored Cape Dutch Revival homestead, and light meals at their deli on the banks of the dam).

Chardonnay is a regional speciality, with De Wetshof specialising in no fewer than five expressions of the variety, while family-friendly Van Loveren has expanded its vast portfolio of wines to include its Almost Zero range of de-alcoholised wines, a good option for hikers and mountain bikers. (The less energetic can choose between various platters, including chocolate and wine, cheese and wine, charcuterie and wine, or nougat, nuts and wine.)

While the Breedekloof, Robertson and the rest of Route 62 are worth the drive for warm hospitality and great value, Stellenbosch and Franschhoek remain traditional favourites for tourists.

Approaching Stellenbosch from the Paarl side, an absolute must-visit on the Klapmuts-Simondium Road is Babylonstoren, a historic wine and fruit farm whose gardens are not only majestic but also supply its two restaurants, Babel and the Greenhouse. If time and budget allow, a stay in the hotel or cottages is an unforgettable experience and includes such activities as a guided garden tour, a morning harvest with the gardeners, bread baking as well as a cellar tour and wine tasting.

Lying to the South-East of Paarl and enclosed on three sides by towering mountains, Franschhoek has retained a distinct French Huguenot character and is regarded as the “culinary capital” of the Cape. La Motte is a highlight with its historic buildings, its collection of art by the South African landscape artist Pierneefs, and its restaurant that puts an innovative twist on traditional cuisine (not to mention its heritage or fynbos walks and site-specific wines). Then drive through the town and turn left at the Huguenot Memorial Museum (worth a visit) to reach Haute Cabriere with its Burgundy-inspired Chardonnay and Pinot Noir (including sparkling wine) and a restaurant recessed into the Middagkrans Mountain, serving up classically inspired cuisine and incredible views. 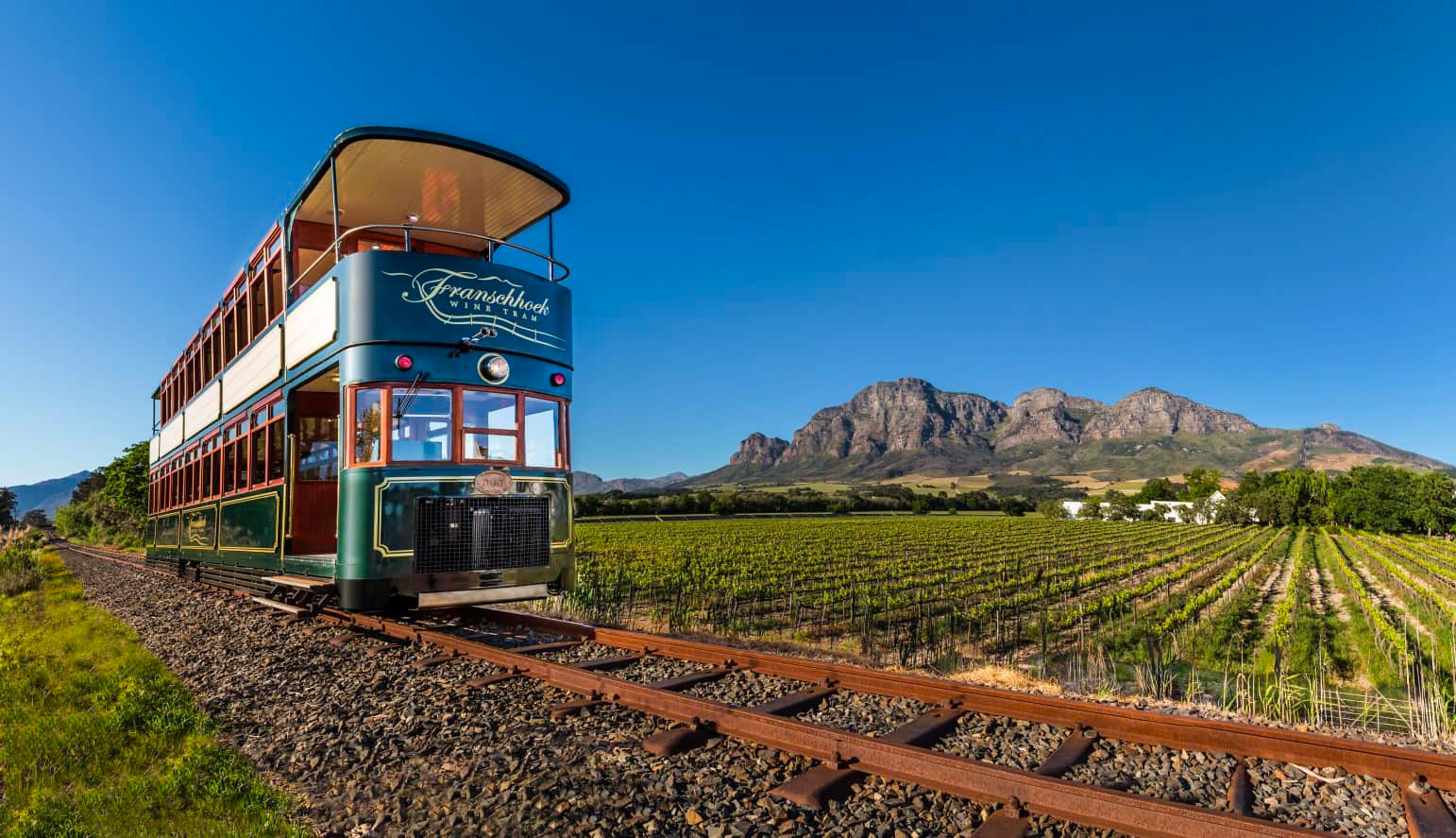 It’s a stunning drive from Franschhoek to Stellenbosch via the Helshoogte Pass, which is where you’ll find the prestige estates of Delaire Graff and Tokara (almost opposite each other). There are so many producers in this intensively farmed district, with its mountainous terrain, good rainfall, deep well-drained soils and diversity of terroirs, that it’s hard to select only a few. Personal favourites include Lanzerac and Stark-Condé Wines in the Jonkershoek Valley, Neethlingshof heading out of town to the West, Uva Mira and Eikendal off the R44 heading down towards Somerset West, and L’Avenir, Laibach and Le Bonheur heading up the R44, back towards Paarl.

Needless to say, however, there are new discoveries waiting to be explored around virtually every corner. Start here: www.visitwinelands.co.za.

By Joanne Gibson – Photographs: Courtesy of the estates