Located South of the 45th parallel, where it enjoys optimal sunshine, mild winters and the beneficial effect of the Mistral wind, the Rhone Valley offers ideal conditions for farming organically. It will therefore come as no surprise that the region spearheads organic production in France. In fact, with 215,000 hectolitres of organically certified wine produced yearly, Vaucluse is the leading department in terms of farmed area. However, the widespread outbreak of downy mildew that hit the Rhone Valley in 2018 set the record straight: in practical terms, transitioning to organic is not without risk. From the impact on their health to the effect on the price of their wines, we have tried to understand what drives winegrowers to farm organically despite the weather hazards. One thing is for sure: with ratings of 90/100 and above, the gamble in terms of quality has paid off.

There is no denying that organic is riding the crest of the wave throughout the wine world. According to a study conducted in 2017 by the SudVinBio marketing board, revenue within the organic wine industry has trebled in six years. Demand, which is increasingly strong both in France and abroad, is inspiring others. The amount of organic wine bottles has surged by 276% in France over the last five years. The effects of the industry going green can be felt even in super and hypermarkets: for the first time this autumn, in-store wine festivals are making no secret about their new-found policies. From the small and medium-sized stores to the large hypermarkets, most retailers are turning the spotlight on their organically certified wines. Wine tourism is also getting its share of the action. From Alsace to South-West France, via Burgundy, the Loire Valley and the Rhone Valley, regions that have switched to organic are attracting increasing numbers of wine enthusiasts, eager to discover new appellations without turning their back on their convictions.

The Rhone Valley, the Promised Land for organic

Is switching to organic farming a prerequisite for successfully navigating through the next decade? While the prospects are promising, the process is not without its issues, even when all the ingredients for success seem to be in place. The Rhone Valley is a perfect example. On paper, the region would seem to be the Promised Land for committed winegrowers. The sun shines all year round, bolstered by the Mistral wind which rids the vines of disease and protects them from the damp. “Organic farming could almost become the norm!” jokes Ludovic Cellier, from Domaine des 3 Cellier in Châteauneuf-du-Pape. In reality, the situation is less clear-cut. In 2018, the region suffered a devastating outbreak of mildew. “The vintage was challenging”, explains François Collard, a winegrower at Domaine Mourgues du Grès in Beaucaire. “We had to juggle with windows of opportunity in the weather, particularly to save Grenache noir which is very sensitive to mildew”. “It was very localised, and all very new to us”, confirms Céline Barbaud, who runs Domaine des Favards, which has been certified organic since 2015. “We had never experienced such a strong onset before. Maybe if we had been used to it, we would have reacted differently”. She was able to save 70 to 80% of her crop, but others weren’t so lucky. “Some growers didn't harvest at all”, she says.

Back-tracking, though, is not an option. For Céline Barbaud, the decision to farm organically became self-evident. “It's so natural to work like this”, she explains. Though only young, she joined her father on the estate in 2010 after working as a plant chemistry engineer. “If it hadn't been possible, I would have done something else. My father was already farming sustainably, using only one conventional treatment per year, as a precaution. Technically, there were no major changes when I arrived. We had not been using weed killers for a long time, and had stopped using insecticides”. There were no economic considerations behind the decision. Céline admits that her primary motivation was actually quite selfish. “I always say to my customers, “if you’re buying organic for health reasons, your rationale is wrong”, she jokes. “You take the first step towards organic farming for yourself, it’s only natural. As winegrowers, we are the most exposed. I am the one who goes behind the sprayers so I’d rather use clean products than carcinogenic ones!” Céline Barbaud is now aiming to reduce the use of copper, despite the fact that it is permitted in specifications for organic viticulture. “Copper is not harmless. It is still a metal in the wine itself”. Inspired by the principles of biodynamics, Céline uses nettle tea and citrus peel extracts to limit copper inputs. She admits: “We are no more implicated than other regions, it is simply easier in the Rhone Valley than in other places”.

Organic’s positive role on the environment

At Domaine des 3 Cellier, organic farming stems first and foremost from conviction. Just like Domaine des Favards, Ludovic and his brother Julien have always seen their father take a logical and sustainable approach to winegrowing, without having to comply with the constraints of specifications. “He used to say, “Why spray when the weather’s nice and dry?” says Ludovic. “He would only use synthetic products when absolutely necessary, in a sensible manner and on a case-by-case basis”. When the two brothers took over the reins of the 19-hectare farm in 2007, they followed the same philosophy. “At the time, specifications referred to wine from organic farming, not organic wine”, explains Ludovic. In his opinion, that framework was too simplistic, leading him to explore the range of possibilities available without worrying about certification. “We have always believed that showing respect for the environment does not just involve the vines themselves”. For several years, the Celliers have included the packaging of their wines in their sustainable approach. The labels are printed without solvents. The corks are certified FSC and the caps are made of aluminium, to simplify recycling. “We don’t print our e-mails, and our computer server runs on 20% recycled energy”, says Ludovic Cellier with a smile on his face. Changes to the specifications for organic wine has led to a shift in the viewpoint of these committed winegrowers. Since the 2016 vintage, all bottles of wine produced at Domaine des 3 Cellier – Châteauneuf-du-Pape, Côtes du Rhône and Vins de France – have been certified. “There hasn’t been much to change in the way we work”, admits Ludovic. Securing organic certification, though, was not the brothers’ final commitment. Three years on and they are now looking into HVE certification to preserve biodiversity on the farm. 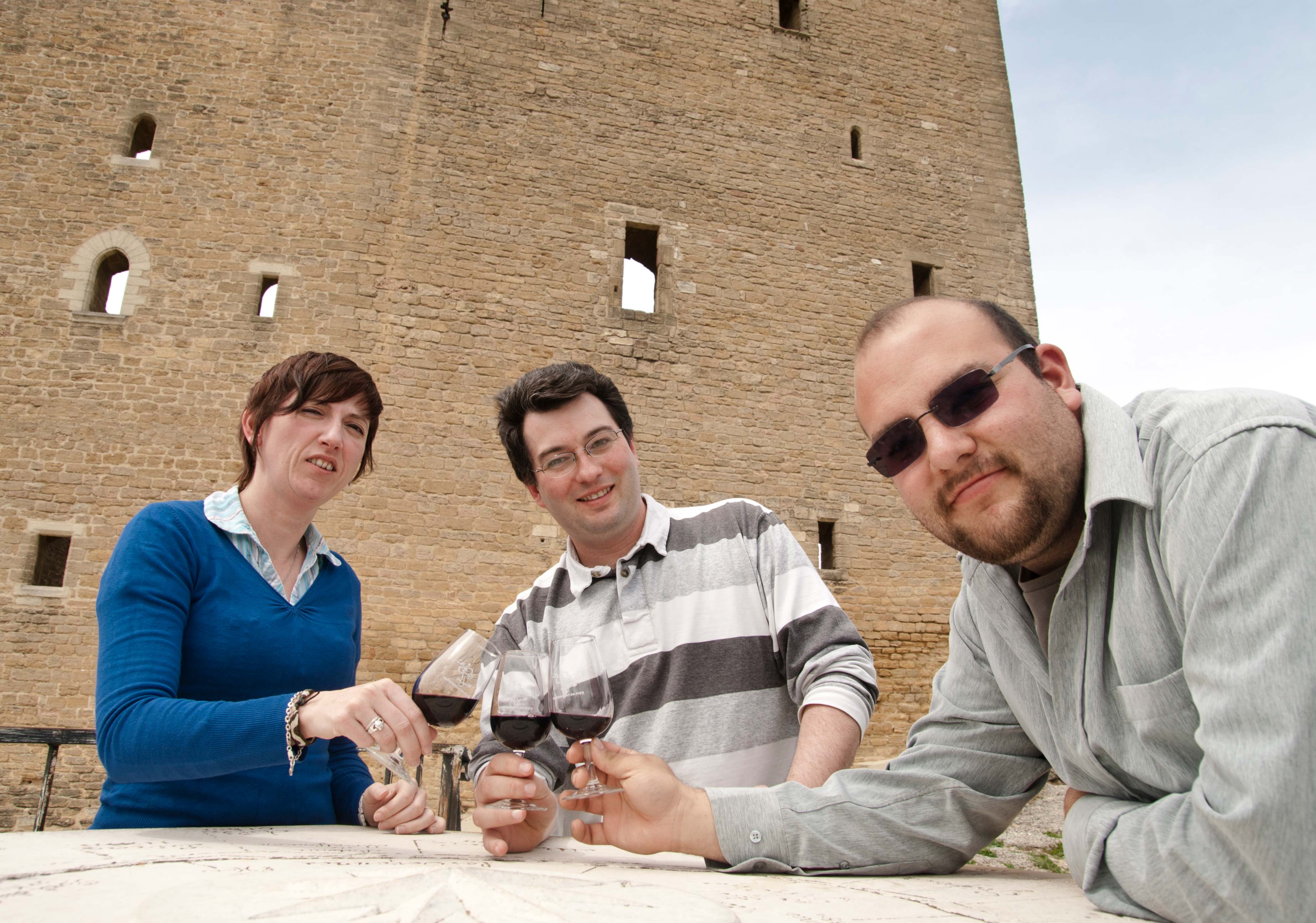 The team at Domaine des 3 Cellier – Nathalie, Ludovic and Julien

How organic can underscore typicity

François Collard is not a dedicated follower of the organic fashion. He sees the transition to organic farming as a long-term process. Since his arrival on the family estate at Château Mourgues du Grès in 1990, he has given careful thought to his conversion to organic, spurred on by the desire to see his wines mirror their origins as closely as possible. “We have a long-standing environmental approach which stems from our desire to produce wines that sit well within our beautiful landscapes”, he explains. For nearly twenty-five years, François Collard has thus been using farming techniques that have gradually inched towards organic in a bid to respond to two essential issues: how can you combat mildew while controlling the use of copper? “We needed to be sure that we could solve these problems before we could convert the entire estate”. With time, he learned to use copper in medicinal amounts only, while also taking advantage of innovations in equipment to improve tillage on his extremely hard soils. Certified organic since the 2014 vintage, his wines reflect his commitment and approach. With roots buried several metres underground, the vines now produce genuine, profound wines that display marked aromatic purity and minerality. Despite this, François Collard is not about to close the book on organic farming that he opened almost thirty years ago. He is now taking a closer look at sulphite-free winemaking and is set to write a new chapter, marking the beginning of a new era....

Is organic just a passing fad? 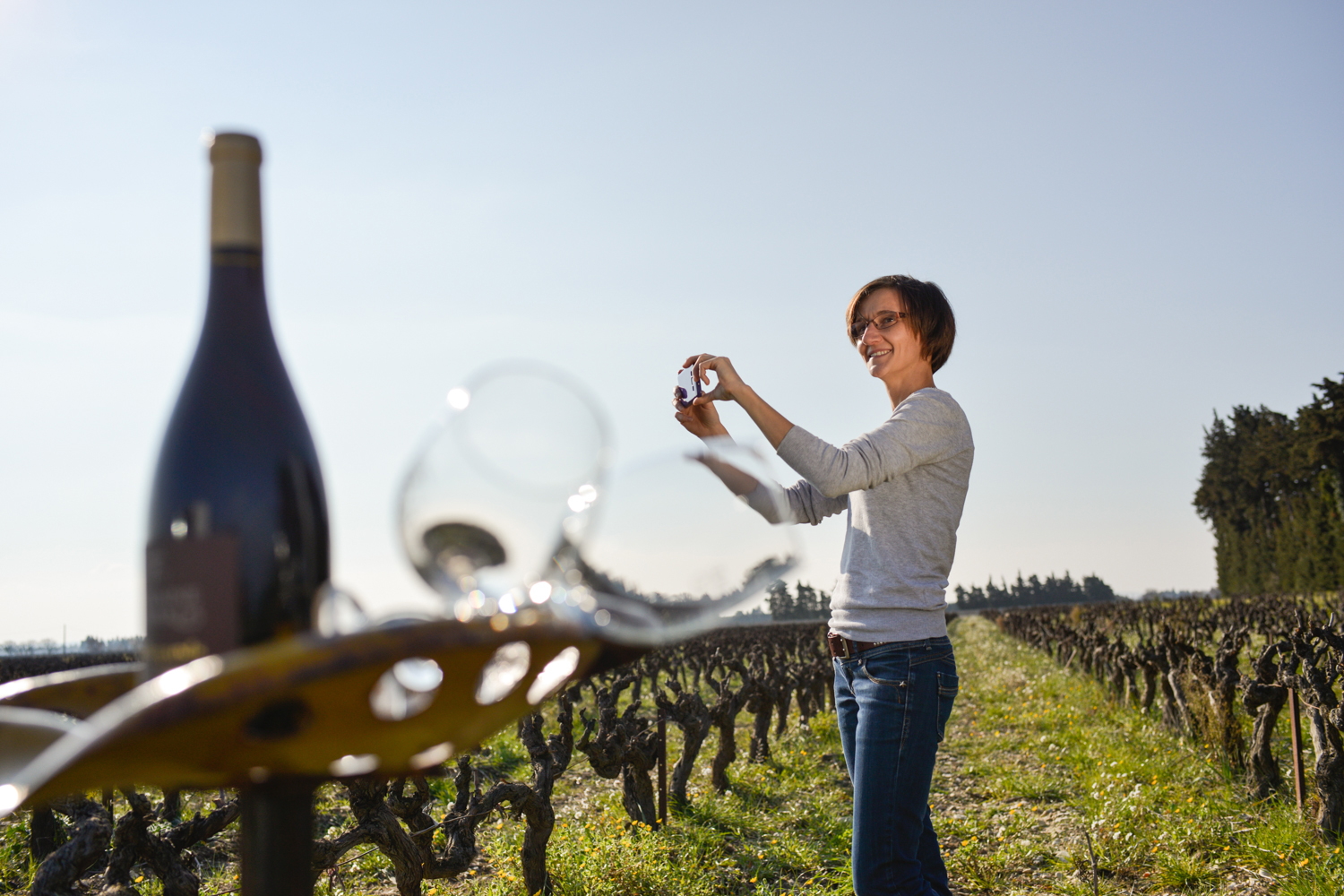 Enjoying the fruits of their labour at Domaine Favards

Whether they switched to organic to protect their health, to highlight the typicity in their wines or to  make their contribution to ecology, the winegrowers in our selection have all witnessed a paradigm shift in the attitude of their customers. A frequent attendee of wine shows for the general public, Céline Barbaud for many years had to confront the sceptics. “For years, many wine enthusiasts would not taste organic wines because they automatically thought they were bad”, she says. “Now, it’s the complete opposite. We have customers who only try organic wines!” Ludovic Cellier has had the same experience. “Some people are only looking for organic certification or the little flower”, he laughs. “The logo helps reassure new customers, who were not necessarily familiar with us when we used to farm sustainably”. Although the number of inquisitive visitors thronging the stands of organic winegrowers is on the rise, the growers claim they are not riding the crest of the organic wave to bump up their prices. “Our long-standing customers would not have agreed to it”, explains Céline Barbaud. For Ludovic Cellier, financial motivations are not the driving force behind a successful switch-over. “For us, the main thing is that the wine is good. If it is better for your health and the environment, then that’s a bonus. His comment is echoed by François Collard, for whom organic farming “is not the silver bullet for sales”. “We have chosen to display the organic logo on our labels because it is always good to inform our customers”, explains the Costières de Nîmes winegrower. He goes on to qualify his comments: “But this is not our primary focus. We prefer to talk about our work, which has been consistent since the 1990s, the style of our wines and vintage variation rather than the organic aspect itself, which ultimately is just a way of managing our vineyards”. This philosophy is light years away from the superficial reactions to passing fads, which confirms that in the Rhone Valley, as elsewhere, the transition to organic farming cannot be successful if it doesn’t come with a great deal of authenticity.

By Alice de La Tour – Photographs: Courtesy of the estates