It may well be the largest island in the Mediterranean, until the 1970s Sicily’s vast swathes of vineyards were given over to mass production, bordering on ten million hectolitres of wine! Since then, the island has broken with its high-volume past and native grape varieties such as Nero d'Avola for the reds and Grillo for the whites have proven to be worth their salt and carved out a place for themselves.

Let’s start with some literature and history: “Sicily has been fortunate enough to be owned, in turn, by productive peoples, some from the North, some from the South, who have covered its land with an infinite diversity of works where the most opposing influences meld in an unexpected and charming way”. This sentence, written at the end of the 19th century by French author Guy de Maupassant in his guide to Sicily, which he visited in 1890, perfectly sums up the character of the island’s wines. Sicily’s distinctive geology, marked by its volcanic soils, produces wines that are most unique and very typical of the slopes of Etna, from Cerasuolo di Vittoria on the southern coast, Marsala to the West of Palermo to the island of Pantelleria off the South-East coast, with its now world-famous sweet wines. But what is most striking is the determination shown by most winegrowers to preserve their thousand-year-old vineyard sites. All the producers we met farm organically – some officially, some not – and are even bordering on biodynamic. There is no doubt that the techniques are facilitated by the weather but they crystallise awareness and a wholehearted commitment to sustainable farming for both today’s consumers and future generations. Join us on our scenic road trip around Sicily. Spadafora: Sicilian nobilityThis noble Sicilian family dates back to 1230. The estate’s current owner, Francesco Spadafora, inherited it from his father, Don Pietro dei Principi di Spadafora, who rebuilt the winery after the 1968 earthquake and began bottling wines more than 30 years ago, in the summer of 1988.The present-day azienda is located in Virzì, not far from Messina. Francesco Spadafora has chosen to make wines entirely from estate-grown grapes, constantly striving to achieve the perfect balance of aroma and flavour, in the most natural way possible and showing respect for the terroir, the vines and also the consumer.Spadafora aims to be “natural”, in his vineyard management and winemaking techniques with no added sulphur, and in the fermentation process which starts with his own yeast. He makes a starter tank with the first grapes, which is subsequently used for all the must.

This gives the wines their unique personality, and recreates the full aromatic potential of the ‘terroir’, the soils of Virzì.

Spadafora also implies sustainability, alternative energies, lightweight low-impact glass and organic corks made from sugar cane. These are some of the practices that go towards showing respect for the environment. Spadafora also matures its wines in the bottle and releases them when they are ready to fully express their potential. The 2009 Sole dei Padri (Sicilia IGT) with its dark, generous and spicy characters can now be enjoyed. On the palate, this is a velvety, virile wine with rich, exotic aromas that is structured, deep and very pure.

Wine production in Virzì is not only a job, it is a lifestyle and a philosophy.

Heading due South, we reach the Gulfi winery. In 1966, its founder, Raffaele Catania, laid the foundation stone for a significant tradition of winegrowing and olive farming. In 1995, his son, Vito, decided to invest in the family business and today, thanks to his pioneering vision, Gulfi has more than fifty hectares of vineyards on the best winegrowing land in eastern Sicily.

Gulfi’s guiding values are its deep-rooted attachment to a land steeped in over 2,000 years of history, as depicted in the mosaic of Amore e Psiche on the Piazza Armerina, Gulfi’s banner, and its natural way of crafting wines, that are farmed organically and made using non-invasive winemaking techniques.

Massal selection, harvesting by hand and non-irrigated vines are all directed at systematically combining maximum finesse with the ultimate in palatability, where balance is the basis of everything. The Pachino vineyard, which in France would probably be called “Nero d'Avola Grand Cru”, produces four remarkable wines: NeroBaronj, NeroMaccarj, NeroSanlore' and Nerobufaleffj. This is a land of great contrasts which is extremely complex with outstanding biodiversity and lies at the point where the African and European tectonic plates meet. It is surrounded by two seas: the Mediterranean and the Ionian. Vito Catania, who died in 2017, grasped the huge winemaking potential of this location. His sons Raffaele, Matteo and Davide have taken up the torch with the same passion and perseverance. Choosing just one example, the 2014 vintage Pino (Terre Siciliane IGT), rated 95/100, is a wine for ageing. It displays an intense garnet hue with faint bricking, recalls red and black fruits and forest floor aromas and has very fine tannins. Even the most demanding wine enthusiasts will find it gratifying.

We have now come to the outskirts of Vittoria, between Ragusa and Gela. The story began in 1697 and since then, wine has always been made here. The soil has ideal characteristics: a surface layer of light red sandy silt from 40 cm to 1 metre deep, resting on a well-drained limestone base, which guarantees a constant supply of absolutely vital water. Today Feudo has approximately 50 hectares of vines where the climate, careful selection of clones and rootstocks along with vineyard density (5,000 to 5,500 vines per hectare) pave the way for simple vineyard management techniques. The natural quality of the grapes is so exceptional that it would be a pity to intervene more than absolutely necessary.The grapes are harvested by hand and handled very gently to keep each berry intact. They are carefully inspected and cleared of anything that could alter the taste of the wine (foliage, stems...). They are then fermented in temperature-controlled stainless steel tanks, which is essential considering Sicily’s latitude, in the winery built from local stone, with walls half a metre thick to protect it from the sun and cool air. Brother and sister Stefano and Marina Girelli have been running Feudo Santa-Tresa since 2002, combining their expertise and experience in the wine industry.Stefano says: “In 2002, my sister Marina and I teamed up with Massimo Maggio to take over the former Santa Tresa estate and began to restore it. Our ethos is to work in harmony with Santa Tresa's natural environment and this is the linchpin of everything we do: respect for native flora and fauna and use of the most natural and non-interventionist vineyard management possible. This finally led to organic certification with the 2009 vintage”. An absolute must-try is the 2018 Frappato (Terre Siciliane IGT), a unique red wine which is Sicilian through to the end of its lingering tannins. It is expressive, fruity and herbal, crisp with spicy accents, invigorating and accessible. Azienda Cummo: Terroir in its genesWe are now located between Gela and Caltanissetta. This estate, created in 2001 by Diego Maurizio Cummo, is a kind of tribute to the project launched by his grandfather, Diego, in the early 1900s. He worked as a sharecropper for one of the island's noble families and passed on to his children his love and passion for the land and vineyards. Diego used to turn the grapes into wine in the farm's small cellar – that can still be seen amidst the vineyards - and sell the wine at home to friends and villagers.Today, the founder’s grandson Diego Maurizio instils the same values in his children, who represent the fourth generation. Those values imply ensuring quality, sustainability and producing honest wines, which offer a faithful rendition of the soils in which they are rooted.The vineyards are located in ‘contradas’ with highly evocative names, situated between Naro, Campobello, Ravanusa and Palma de Montechiaro, all of them farmed organically. In the Contrada Carbuscia Albiat, Nero Cappuccio, Cabernet Franc, Viognier and Chardonnay are grown. The Contrada Torretta Spagnolo is home to Nero d'Avola, Frappato, Syrah, Nero Cappuccio, Grillo and Moscato.The soils here can change from one vine row to another and range from white limestone to black clay. Located at an elevation of 400 metres and yet far from the sea, they encounter low rainfall and significant day-night temperature differences. These factors have a major influence on production, yielding fresh, intense and persistent wines, such as Nero Cappuccio 1908 Vintage 2015 (Terre Siciliane IGT - rated 89/100), with its deep ruby hue, delicious ripe red fruits, generous and powerful yet balanced palate and compelling fresh finish.

This endearing family produces wines from local cultivars and international varieties along with extra virgin olive oil in the diminutive areas of Contessa Entellina and Sambuca di Sicilia, near Agrigento. Its long family history spans five generations. Here, the entire property and winery have been certified organic since 1997 by Suolo e Salute SRL. Production and exports began in 1996 with Aurelio and Barbara Di Giovanna and their sons Gunther & Klaus. The present-day property covers nearly 100 hectares, including 56 hectares of vines and 13 hectares of olive trees, supplemented by forests and wheat fields.

The five family vineyards are farmed by hand from pruning to harvesting, using organic techniques throughout the growing season. They are located in the small DOCs of Contessa Entellina and Sambuca di Sicilia, in the heart of Terre Sicane. The Miccina, Gerbino and Paradiso vineyards are situated at an average elevation of 350 to 480 m above sea level with tufa, limestone and clay soils in Contessa Entellina.

The high-altitude vineyards of San Giacomo and Fiuminello thrive at between 650 and 830 m above sea level on volcanic tufa, limestone and clay soils, in the mountains surrounding the Sambuca di Sicilia cellar, including the highest Grillo in Sicily, at an altitude of 830 m. Here, international and native grape varieties grow side by side, following extensive soil studies in the 1980s. The white varieties are Chardonnay, Grillo and Viognier and the reds Nero d'Avola, Nerello Mascalese, Syrah, Cabernet-Sauvignon and Merlot.

If by some misfortune you were only allowed to remember one of them, it would probably be the 2018 Vurria Grillo (90/100) a mineral, fruity, delicate, precise and persistent white wine, and a real journey through the Sicilian countryside. 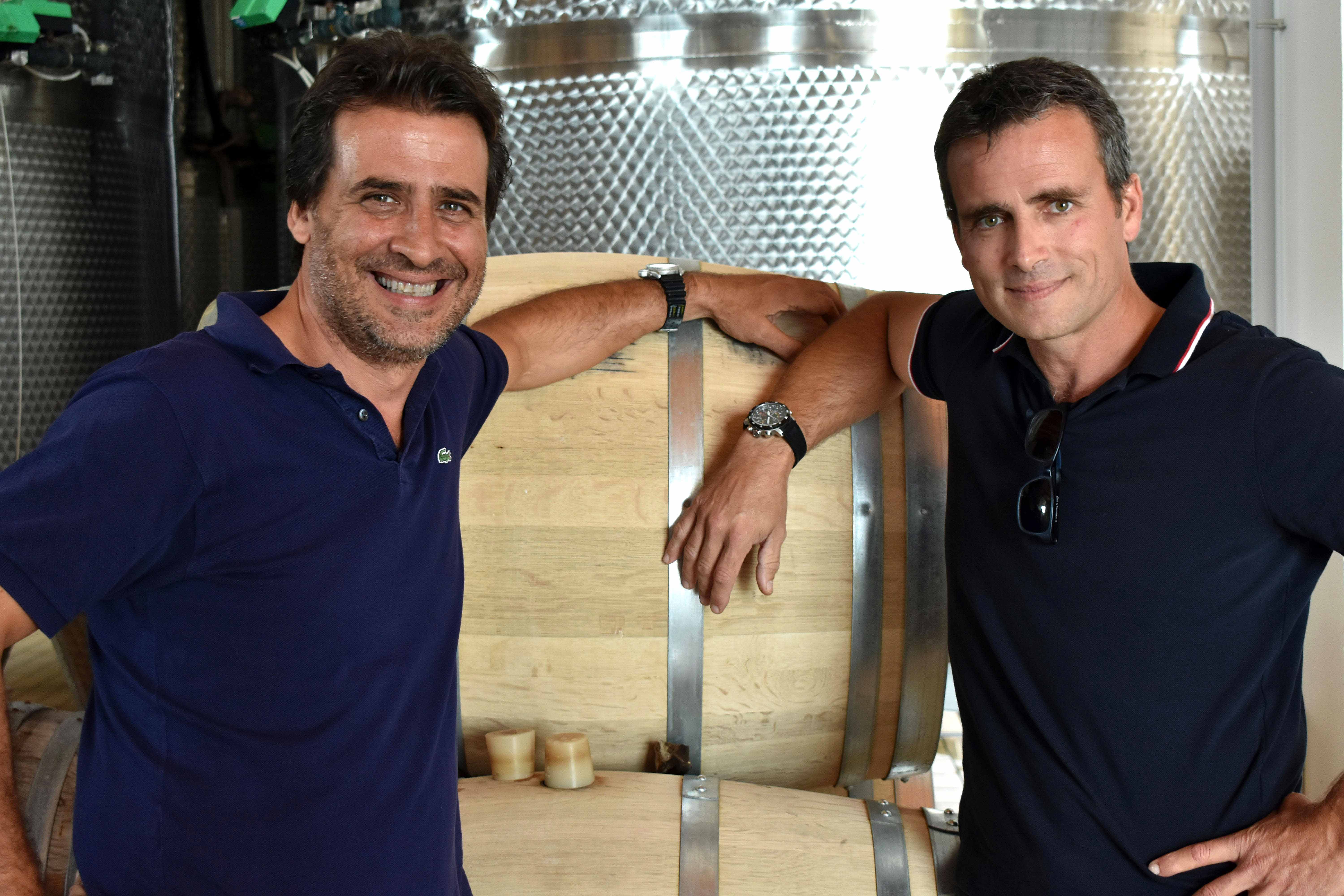 Klaus and Gunther Di Giovanna in the winery

This ‘azienda’ was founded in 2005 in the famous town of Marsala. It stems from the courage and hard work of winemaker Bruno Fina and his wife Mariella who now run the company with their three children. Marco, the eldest, manages sales and administration, Sergio handles technical aspects, and Federica, the youngest, is in charge of marketing, communication and, since 2016, the ‘Orizzonte Fina’ wine tourism concept which is inspired by the incredible vistas of Cantine Fina.

Bruno is a renowned winemaker in Sicily, mainly due to his connections with Giacomo Tachis, who first approached Sicily as a winegrowing entity with distinct areas more or less suited to certain grape varieties. Now 100% organic, Cantine Fina uses native and international varieties revolving around a simple concept: the soil and weather patterns are analysed and inspiration is sought in the region's history to ascertain the grape variety best suited to the area. Cantine Fina grows local cultivars such as Grillo, Zibibbo, Nero d'Avola and Perricone but also international vines such as Traminer, Sauvignon, Chardonnay, Viognier, Cabernet-Sauvignon, Merlot and Petit Verdot. This is certainly one azienda with a promising future. 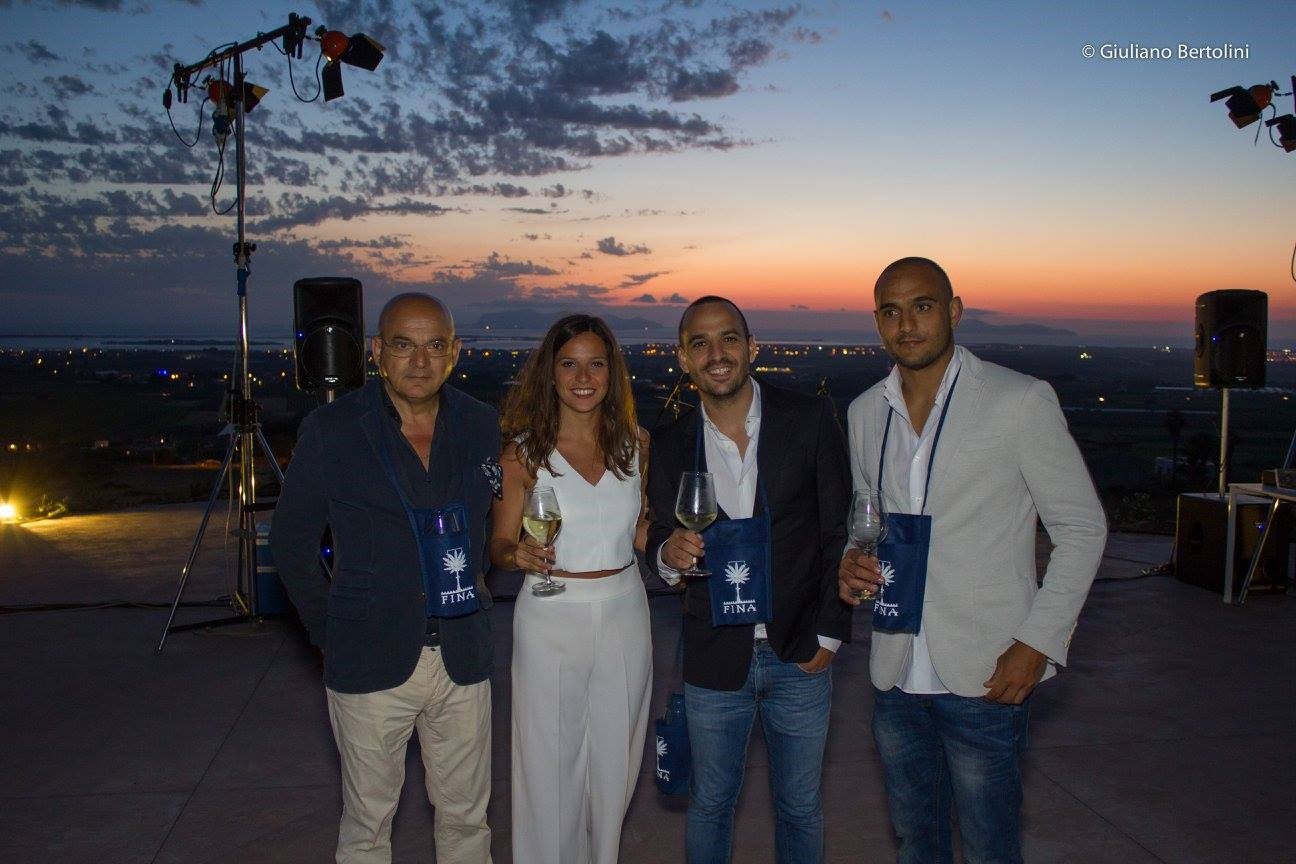 Admittedly Sicily still has a lot to prove. But the wines currently being grown on the island show a quantum leap in quality, with a real commitment to the environment and a good balance between native grape varieties and more international grapes that make it easier to penetrate export markets. Located on an island with a propitious climate and part of a country that has experienced exponential growth in tourism in recent years, this wine region seems all-set to enjoy a bright future.

By Sylvain Patard - Photographs: courtesy of the estates