In addition to growing award-winning Chardonnay, Môreson has an ‘amazing’ Cabernet Franc vineyard.

South African wine continues to improve as winegrowers gain a better understanding of their terroir. Here we meet four great representatives of their unique appellations.

There are more than 100 wine appellations in South Africa. Some of them are historically and internationally well known, such as the ‘district’ of Stellenbosch and the ‘ward’ of Constantia, while a large district like Paarl is perhaps best known for one of its sub-divisions, namely Franschhoek. And then there are the newer, cooler-climate winegrowing areas, including Darling and Elgin.

The Cape’s Franschhoek Valley is where many French Huguenots settled in the late 1600s, and one of their descendants is Clayton Reabow, winemaker at Môreson Wines, who was recently named South Africa’s Diners Club Winemaker of the Year.

“I’m proud to have settled in the same valley as my ancestors”, says Reabow, who qualified as a winemaker at Stellenbosch University in 2005 – and then couldn’t find a job. “In hindsight, this was the best thing that could have happened because I worked harvests, locally and abroad, in wineries that ranged in production size from 100 tons to 10,000 tons. I realised that my passion lay in smaller, boutique wineries where I could have a “blank canvas” to express myself”.

In 2007, he secured an interview at Môreson, a 30-hectare farm owned by the Friedman family. “Môreson was then a very different place, with a vast wine portfolio – 35 wines across three ranges! In essence, it was not for me, except I was offered the freedom to work without constraint”.

He was employed not only to work ‘in’ the business, producing wine, but also ‘on’ the business with the owners, firstly building the right team – “people with the correct mindsets as opposed to skillsets” – and secondly becoming much more focused in terms of production. Today there are only 10 wines in the Môreson portfolio and four wines in the second-label Miss Molly portfolio, and the plan is to reduce the Môreson portfolio even further – to six wines – to showcase only Franschhoek fruit (rather than buying fruit from other areas, as many do).

“Franschhoek is very small in terms of vineyard surface, with only 1,245 hectares planted, but we have amazing pockets that work very well for varieties including Chardonnay, Semillon and Cabernet Franc”, says Reabow.

At Môreson, the primary focus is Chardonnay (it was the Mercator Chardonnay 2017 that impressed the Diners Club judges). “Our very high diurnal temperature variation allows for acid preservation at night and optimal sugar accumulation during the day, without prolonged metabolic activity. This gives us a wide spectrum of styles to play with. Furthermore, matching clones to available soil types is of paramount importance, so earlier-ripening clones destined for our [Méthode Traditionnelle] Cap Classique are planted on lighter, sandier soils, reserving the more structured soils for the later-ripening clones used in our still wines”.

Married to Leigh, with two daughters, Reabow believes the role of a winemaker is simply “to usher the grape gently through the winery, converting it slowly into wine”. He strives to minimise or even eradicate the use of wine additives, wine machinery and excessive pumping or movement of the wine. “Everything we do is designed to maintain the natural integrity of the grape”.

Runner-up in the Diners Club Winemaker of the Year competition was Andries Burger, cellarmaster at Paul Cluver Wines, situated on De Rust Estate in Elgin.

Burger grew up in Paarl and was introduced to wine at an early age. “As kids, we were given a small glass of wine with Sunday lunch”, he recalls. “In high school, when my parents had guests for dinner, I helped my father select the wines. I think that created the interest”.

Intending to become a viticulturist (“like all boys, I liked the outdoors!”), he studied at Stellenbosch University. “But in the second semester of my first year, we had tutored tastings, and during these tastings I realised there was much more to wine so I decided to specialise in Oenology”.

As a student, Burger gained hands-on experience locally at Thelema in Stellenbosch (under Gyles Webb) and in Bordeaux at Chateau Margaux (under Paul Pontallier). “Both had a profound influence on my winemaking career”. He also met his future wife, Inge, daughter of Dr Paul Clüver, a neurosurgeon who had started growing grapes at his farm in Elgin (traditionally an apple-growing area).

Dr Clüver’s grapes were processed at Nederburg in Paarl, where Burger worked for two years after graduation. “One day my father-in-law asked me whether his grapes from this unique area were getting the attention they deserved in such a big winery. Obviously, my reply was no, it would be best to make your own wine, so in 1996 a winery was built on the farm and in 1997 I started to make the wine there”.

Burger explains that Elgin is the coolest vinicultural area in South Africa, with less than 660 hectares under vine. “Firstly, you must cross a mountain range to get to the valley; secondly, our proximity to the ocean is unique. This gives us the opportunity to make wines with great freshness, elegance and balance”.

Specialising in Chardonnay (two expressions) and Pinot Noir (three expressions), he stresses: “It is only when you truly understand your terroir that you can make a great wine”.

This perhaps explains why he is also passionate about Riesling, making three expressions, including a noble hate harvest. “Riesling is a variety that really reflects terroir and lends itself to a variety of wine styles”.

As winemaker, Burger is part of an incredibly close-knit team of family members: Inge is the finance manager, her sisters Liesl and Karin are respectively the marketing manager and production manager (orchards), and their brother Paul Cluver IV is the managing director. “We have a responsibility to take the business forward to the next generations”. 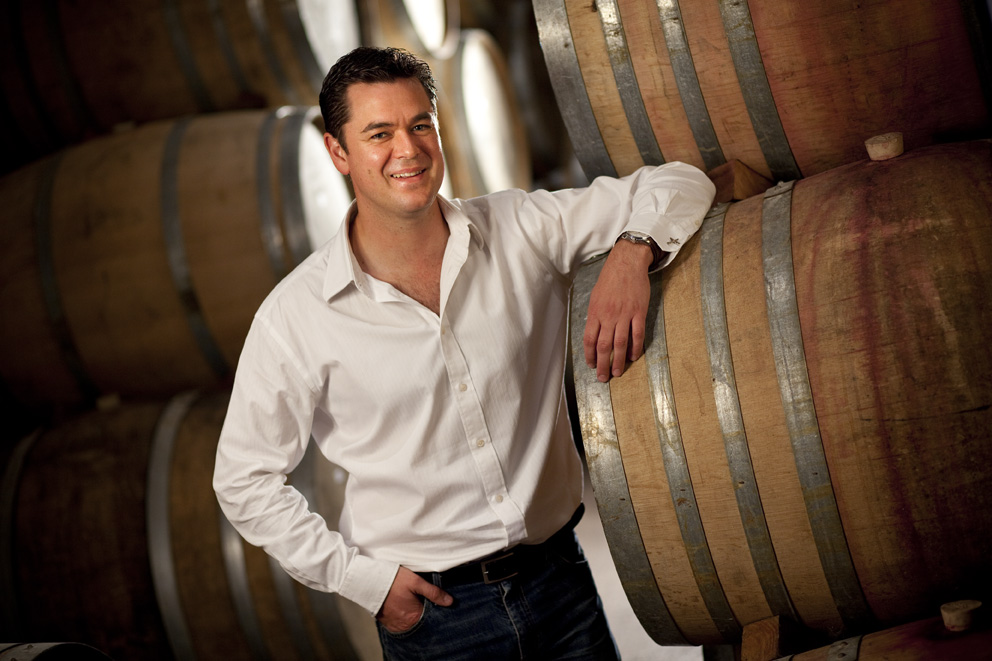 Winemaker Matthew Copeland has a very simple and low-tech approach in the cellar.

Like Andries Burger, Matthew Copeland grew up in Paarl – and he is still there, more specifically in the Voor-Paardeberg wine ward, where he is the senior winemaker at Vondeling. Dating back to 1704 when it was granted to a Swedish immigrant named Oloff Bergh, the farm is now owned by Englishman Julian Johnsen with partners Anthony Ward and Richard Gower.

“Growing up in Paarl, contact with the wine industry was inevitable, but mine was a veritable collision course”, says Copeland. “When I was still at school, my father decided to open a bottling plant. He was slightly ahead of his time and it didn’t last but some supply commitments remained, which I took over after school. A year later, in 1997, I had an opportunity to do an apprenticeship in organic Swiss winemaking. The rest is history”.

Copeland spent three years harvesting abroad (in Switzerland, France, California, Australia and New Zealand) and only then did he return home to study winemaking at the Elsenburg Agricultural Training Institute. “Most people do it the other way round”, he laughs.

After graduating with distinction he got a job at Welbedacht in Wellington, where he was introduced to Johnsen by a mutual friend. When Johnsen invited him to join his new winery, he eagerly accepted, attracted firstly by the Voor-Paardeberg which had long been an uncredited source of top-quality grapes (“it’s also a close community with a great sense of camaraderie and a wonderful energy”) and secondly by the very simple and low-tech approach in the Vondeling cellar. “No gimmicks, just blood, sweat and tears! For me, winemaking is merely an extension of the vineyards and as such I focus more and more on farming. I love that it’s a complete cycle of creation – from the earth, through seasons, and into your glass”.

Copeland lives on the farm with his wife Yolandi and two sons, Joshua and Henry. “I got married here, in Vondeling’s fairytale St Clement’s Chapel, and I had my children here – my roots run deep”.

He says Vondeling has steep, well-drained granite soils higher up and clay-rich shales lower down. “This mix allows us to craft well-rounded, complex wines”.

Some 100 hectares are under vine, and the range is fairly large, but Copeland is most excited about two limited-release wines: the Bowwood Pinotage (trophy winner at the 2018 Michelangelo International Wine Awards) and a Bordeaux-style blend named Philosophie. “Limited releases allow you to be very site specific and really push the boundaries of creativity and quality”. 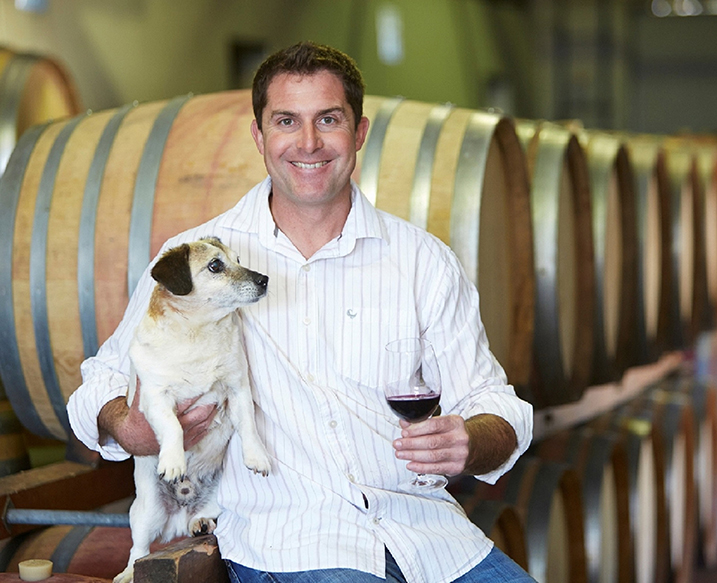 Groote Post winemaker Lukas Wentzel in the cellar with his dog, named Shiraz.

About an hour away from Cape Town, up the West Coast, is the Darling appellation, famous for its spectacular wild flowers in springtime, and increasingly for relatively cool-climate wines as well.

In the early days of the Cape Colony, this was prime cattle grazing land, with a number of guarding stations or ‘posts’ established to prevent the theft of livestock. The largest was duly named ‘Groote Post’ and the name stuck through the centuries, through many changes in ownership, most recently in 1972 when third-generation dairyman Peter Pentz purchased the land, soon also acquiring the neighbouring property – some 3,000 hectares in total.

In 2001, Pentz and his son Nick (now in charge) decided to focus exclusively on wine production, and when young winemaker Lukas Wentzel (then working at La Motte in Franschhoek) heard about it from his mentor, Charles Hopkins of De Grendel Wines in Durbanville, he applied for the job. “I was fortunate to get an interview and just loved the area and the ethos of the Pentz family and their plans for the future. Eighteen years later, I am still here!”A graduate of Elsenburg, Wentzel loves the diversity of the wine industry: “It is an industry that lends itself to creativity, but you also need to have your business cap on”. He sums up his winemaking approach as “attention to detail for clean, honest wines”. Above all, though, he believes a winemaker must understand terroir – in the case of Groote Post, its rolling hills in very close proximity to the icy Atlantic Ocean. “Our deep, well-structured, young, decomposed granite soils give our wines lovely honest fruit, minerality and structure”.

Darling is known for aromatic Sauvignon Blanc in particular, but Wentzel produces everything from Chardonnay, Chenin Blanc and Riesling to Pinot Noir, Merlot and Shiraz. Currently he is most excited about his new releases, whose names hint at the minerality typical of this coastal appellation: the Seasalter Sauvignon Blanc (slightly wooded) and the Salt of the Earth blend of Shiraz and Cinsault. “It’s a totally new approach to style and cultivar blending”, says Wentzel, who says he feels proud to be part of an industry-wide drive to produce “special and unique South African wines in a higher price bracket, which are definitely improving our image as a quality producing wine country”.

By Joanne Gibson - Photographs: Courtesy of the estates