The Côte de Beaune, getting past the clichés

The superb cellar at Domaine Coste-Caumartin for maturing the tanning

For many people, the Côte de Beaune evokes top-flight white wines produced on small, centuries-old estates by countryfied Burgundy winegrowers. Whilst there is some truth to this idealised picture, it is gradually fading away.

Unlike the image portrayed by this very conservative region, not every aspect of it is cast in stone. A reasonable amount of red wine is produced; the properties sometimes include chateaux; winegrowers and trading companies are constantly being modernised; and above all, some farms have overseas owners. We take an enlightening trip to a ‘bouquet’ of five companies.

The Sordet family acquired this estate in... 1793, explains Jérôme who currently farms its dozen or so hectares with his son Benoît (the name change is due to it being passed down by the female side of the family). The estate is now located in buildings dating back to 1610 in the village of Pommard (photo10), where they welcome private visitors so pop along and see them. Pommard – along with Corton – produces the most famous reds in the Côte de Beaune. Pinot Noir has a reputation here for yielding powerful, strict wines, which is why the Sordets recommend waiting 8 to 12 years before uncorking their 1er Cru ‘Les Fremiers’. This is particularly true of wines from the southern part of the valley which divides the village in two and is home to iron oolite scree. Conversely, wines from the North are refined and elegant. The Sordets’ 1er Cru Monopole, ‘Les Boucherottes’ (photo11), which is set within a walled enclosure, offers up a very fine, velvety attack on the palate.

Benoît, who is now in charge of technical management, therefore has a duty to show as much deference as possible to such distinctive vineyard sites. The first task is to extract lots of fruit by slowing down fermentation. As the winery is steeped in native ferments, external inputs are not needed and the yeast gets to work. At the maturation phase only 10 to 20% of new barrels are used because micro-oxygenation refines the tannins (photo12). The father created a new winery, which the son in turn has modernised, using software for winemaking and lowering doses of sulphur for instance.

The family was previously based a little farther West, in Saint-Romain. The great-grandfather lived in the chateau there. Here, too, the wines were mainly red, but over the past thirty years it became apparent that some soils containing white marl were perfectly well-suited to the minerality of Chardonnay, hence lending credence to the saying “soil colour equals wine colour”. The Sordet family have kept land here, including a walled vineyard in the chateau’s former grounds, and also produce white wine. Knowledge - and fashions – may be changing, but so too are winegrowers!

Compared to the average area in Côte d'Or (around 6 ha), this Château (photo20) is a titan, boasting 67 ha under vine and 40 appellations including nineteen Premiers Crus and three Grands Crus!

Emmanuel Escutenaire, the head winemaker, goes into more detail. The 85 plots are spread over 20 km in length. (photo201). The estate’s policy is therefore to task about fifteen labourers with vineyard management. Each one is in charge of 3.3 ha, which never changes. A viticulturalist and a permanent staff of 5, who also have their own vineyard to manage, monitor the whole property. Since investor Olivier Halley took over the chateau – along with Château de Marsannay, which we mentioned in GG n°37 – new tractors have been bought and the focus has been placed on organic farming. Whilst the tractors are used for tillage, spraying and vine trimming, harvesting is done entirely by hand (photo21). The switch-over to organic is gradual, starting with 8 ha, then 15, 30.... The objective for 2019 is to reach two-thirds of vineyard area.

In the winery too, available resources are substantial. Once picked, the Chardonnay is sorted manually, while the Pinot Noir is sorted using an optical sorting table because the 3 week-long maceration in tanks requires extremely strict selection. Emmanuel also uses ‘bio-protection’, a technique that emerged about ten years ago. By putting non-saccharomyces yeast in the tanks, it protects the must and prevents fermentation from starting. During this skin-contact maceration phase, the aim is to extract as much aroma as possible. The technique reduces the amount of sulphur normally used at this stage. The white wines are barrel-fermented (including 30% new oak from prime wood). Fermentation of the reds lasts three weeks and involves punching down of the skins, pumping over of the juice and tasting twice a day to monitor progress. (photo22).

The wines are subsequently matured in one of the Château’s 1,200 barrels! (photo23). Finally, inert nitrogen and carbon dioxide are injected into the 300,000 bottles, again to stabilise the wine whilst reducing usage of sulphur. The wines are then shipped worldwide – using the same distribution network as Château de Marsannay. Exports have increased by up to 30%. But Stéphane Follin-Arbelet, who manages the two farms, has also developed wine tourism and the Château receives visits from 20,000 people a year. 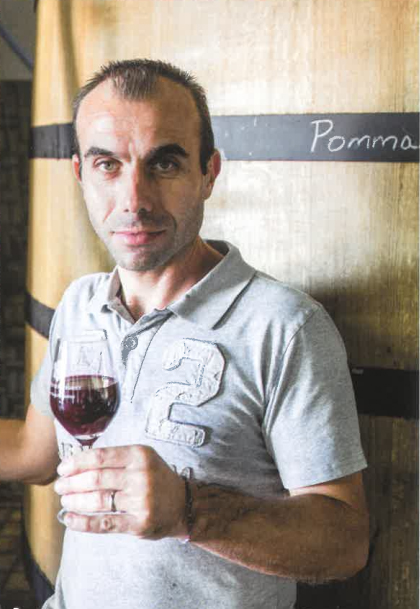 The name ‘Parcellaires de Saulx’ is new (October 2018), but the company taken over by American investors Dupré-Nunnelly is one of the oldest ‘maisons de vin’ (as trading companies are now known) in Meursault. Jean-Luc Vitoux, a former corporate lawyer and co-investor, is tasked with developing the business.

The choice of name offers a clue to its focus, which is to put grapes from a single vineyard, grown by a single winegrower, into the bottle. Although this is customary for Grands and Premiers Crus, the company follows the same tack for Village appellations. Such a close connection with individual vineyard sites poses many challenges. For example, winegrowers must state the plot when they declare their harvest, so that they can mention it on the label.

The acquisition of the company did not include its supplies. “We find winegrowers prepared to sell”, says Vitoux, but to add to the challenge, he is looking for organic or biodynamic wines. He is nearly 70% of the way there, and will feature it on labels when the process is complete.

For the whites, he buys grapes or must and handles winemaking. With the help of Isabelle Laurand, the company’s Burgundian winemaker (photo301), they taste and decide together. Contracts are renewed annually, but the goal is to renew 95% of them, to ensure consistency. “It's restrictive," he says. Native yeast is used during the winemaking process (and added only when needed), and the wines are lightly filtered and sometimes fined to clarify them.

For the reds, the company buys wines and matures them. There is currently no vat room suitable for winemaking, but this will change. The company has 1,500 m2 of beautiful cellars where the cool temperature is ideal for very finely tuned maturation, and doesn’t require air conditioning (photo 302). Parcellaires de Saulx currently produces approximately 30,000 bottles. The desired wine profile is structured, but fruit-forward. “The house style must not take precedence over terroir” points out Jean-Luc Vitoux.

Patrice and Laurence Ollivier, the Marsannay winegrowers we mentioned in GG n°37, also own some vineyards in this part of Burgundy, starting with Savigny-lès-Beaune where Laurence's parents planted vines between 1976 and 1979; it is often said that “you plant vines for your children”. First they planted Pinot noir vines in a vineyard called ‘Les Golardes’. The fairly deep, clayey-limestone soil lends itself well to the varietal. The plot’s elevation - it is located at the top of the village - is counterbalanced by a south-facing aspect, but it is still one of the last vineyards to be harvested on the estate. It now produces wines that are a little less tannic than in Gevrey-Chambertin, but show beautiful fruit.

Subsequently, on a stonier part of the plot, they planted some Chardonnay, again following the principle that “white soil equates to white wine”. The task was challenging and the young vines had to be planted in pots, a technique which gives the young shoots some soil and moisture to get them started. Training was also difficult, but the result today is a white wine displaying beautiful minerality, admittedly a little less than in Puligny, but more than in Marsannay.

In Puligny-Montrachet, the Olliviers also have a vineyard. This is a challenge, because it is situated more than 50 km from their base in Marsannay! Also, its steep incline rules out mechanisation. But the vineyard dates back to 1956 and is planted on sandy, well-draining soil in a superb location, right next to the famous Les Pucelles ‘climat’. The resultant wine shows gunflint minerality, whilst the Savigny has more body and honeyed aromas. This array of terroirs, producing such different results, is precisely what the Olliviers are looking for.

In GG n°37, the all-female label by Domaine Fougeray de Beauclair (made by Laurence and Mélody) is called ‘Cœur de femmes’. After a trip to Canada, Laurence's son gave them the idea of launching an ‘orange’ wine.

We meet Nathalie Bernard, the great-great-granddaughter of Charles Mimeur, who acquired the historic Château de Chassagne-Montrachet estate in 1919. It encapsulates a classic aspect of Burgundian history, with a chateau dating back to at least the 13th century, where vineyards were farmed and which was sold and divided up during the Revolution. Then there is the family (photo 51) which, at the turn of the 20th century (in 1919), bought the vines and some of the buildings. (photo 511)

Today, the family owns 8 ha, including a 5-ha vineyard site which covers 98% of the original Château de Chassagne-Montrachet estate. The vineyard is mostly enclosed by walls, where the family grows white and red wines. A large, unbroken plot adjacent to the cellars allows the vines to be monitored effortlessly and ensures the quality of the fruit at harvest by reducing transportation time. Still helped by her father - do you know any winegrowers who give up completely? - and a very small team, Nathalie (photo 52) works in the vineyard and manages winemaking at the estate.

The approach here is traditional. The vines are grown without herbicides (photo512) but the estate is not organic because they prefer to use a few fungicides, rather than compensate with more Bordeaux mixture and risk saturating the soil with copper. In the winery, cultured yeast has not been used since 2006. After the white grapes have been pressed, the must is deliberately exposed to oxygen to naturally protect the wines from the risk of premature oxidation. It is then put into casks and, using yeast in the atmosphere, alcoholic fermentation begins naturally, both for the whites and the reds. Subsequently, fermentation can last up to 5 or 6 months for the whites. Such a long period of time postpones the addition of sulphites, which can therefore be used very sparingly. 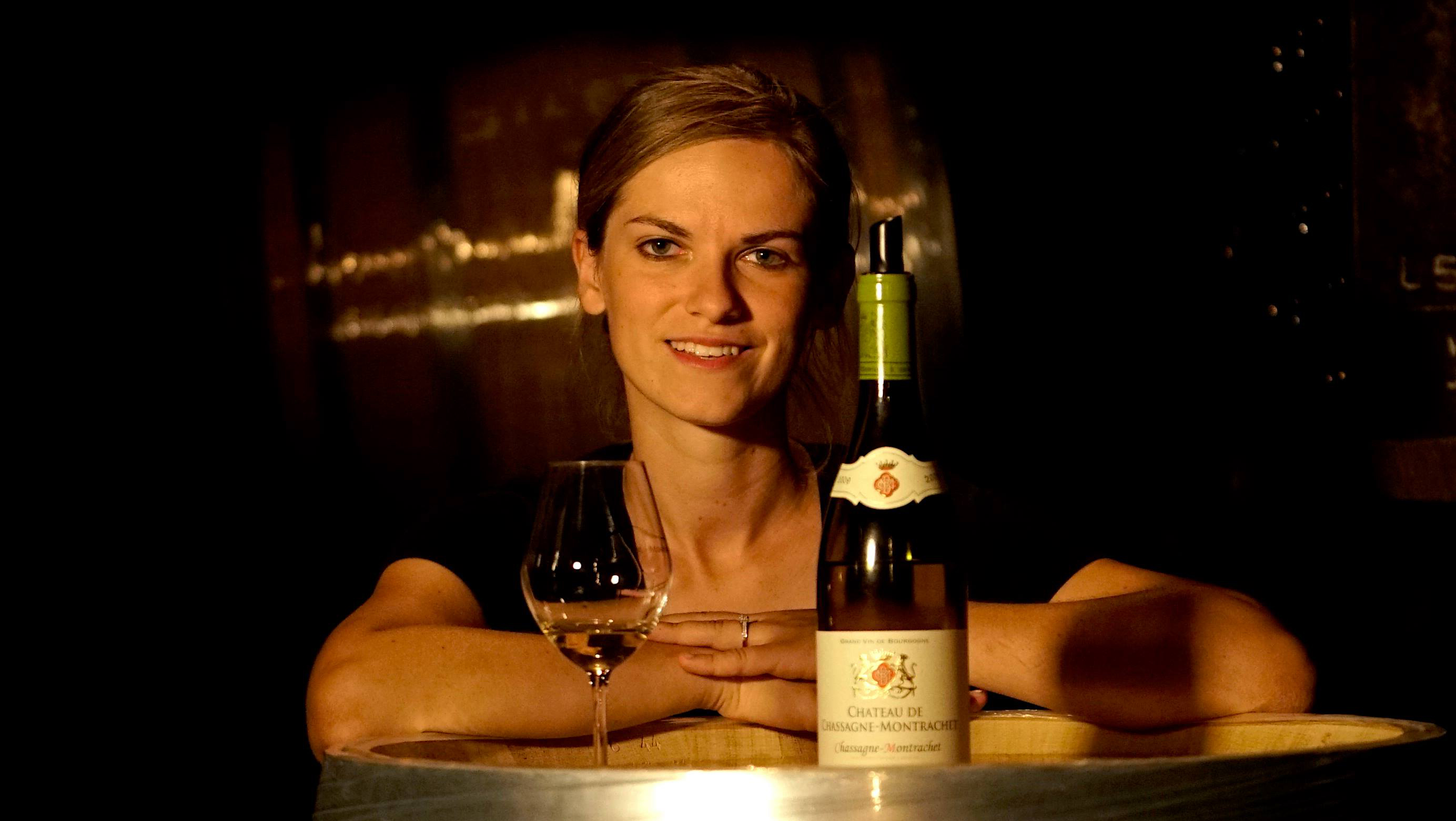 The white wines (65% of production) are stirred regularly to develop the hallmark fat in Chassagne-Montrachet wines (photo 513). Nathalie explains that the wines are generally richer than those of the neighbouring village of Puligny, which are better known for their tension. Harvesting typically occurs a little later in Chassagne. Richness should not be mistaken for sugar, however, and the wines stay bone dry with residual sugar levels ranging from 1 to 1.5 g/l (human perception of sugar in a liquid starts for most of us at around 4 g/l).

The estate also has a few other vineyard plots. The ½ hectare ‘En Journoblot’ vineyard is located on the other side of the famous Bâtard-Montrachet vineyard, with just a path separating the two. Strewn with limestone, it produces a highly prized wine. The estate exports nearly 70% of its wines to regions such as the United States, the United Kingdom and Asia.

This steady increase in exports is typical across the Côte de Beaune area. The entire world wants to drink its wines, and you won’t hear many winegrowers complaining about that!

By Alain Echalier – Photographs: Courtesy of the estates